Villains Wiki
Register
Don't have an account?
Sign In
Advertisement
in: Monsters, Mythology Villains, Villains of Folklore,
and 20 more

Mischievous Youkai
The Kappa (in Japanese: 河童, which translates into river-child) is a type of mischievous legendary creature found in Japanese folklore. The plural for kappa can either be "kappas" or just simply "kappa". According to medieval Japan, the myth tells that kappas can be found dwelling in lakes, rivers, and swamps. These creatures take the form of a turtle and a monkey; however, these creatures resemble frogs.

The kappa acts by either stealing crops or kidnapping and eating children. These creatures are fond of cucumber and love to enjoy sumo wrestling, so people bribed them with cucumbers and they promised almost everything. Once a promised was made, the kappas were honor-bounding to keep the promise. Kappas are also known for raping, insulting, and also threatening women. This evil event caused women to have a lack of pregnancy and could mistreat women. It said that kappas are also intelligent, as they are known for being knowledgeable. If they are befriended, they are very loyal and benevolent, so they will never go against a person's word.

Kappas usually take the form between a turtle and a monkey. They are usually green in color, but there were also different color types said to exist. The kappa's eyes are triangular and elongated. The kappa is depicted with an apelike face or with a tortoise beak, also having sport shells on their scaly skin. It is also given a bowl-like depression on their head filled with water, which is its power source.

The player will encounter kappa in the Japanese region. These enemies share the same model in the New York region.

The kappa is a hostile creature which is able to attack Maxwell in Scribblenauts. They are spawned from portals. If Maxwell gives a kappa a cucumber, then it will eat it. In Super Scribblenauts, if a kappa eats a cucumber, it will attain the friendly adjective.

The player will find kappas in the Japanese garden level in their first appearance. These enemies will lash out their tongues at the player. 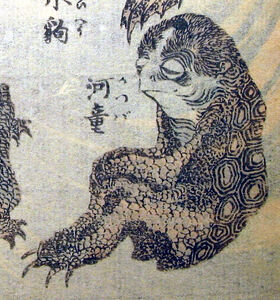 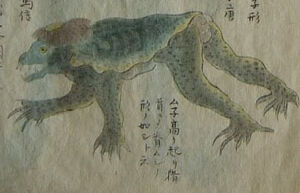 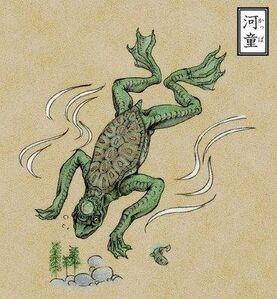