He was voiced by Ron Rubin.

Like all who partake in piracy, Skurvy is raucous, selfish, tough, cold-hearted, but also exhibits a high level of intelligence, and can assess others very quickly, exploiting and using their weaknesses against them for his personal gain.

For example, he understood Donkey Kong's lack of intelligence made him exploitable, expertly mimicking the gorilla's movements and tricking DK into thinking this was his reflection, leading DK to believe he was a pirate. Skurvy also robbed his mother blind, starting off his life of piracy, despite her vouching for him. He also captured DK and Diddy several times, proving how dangerous he is.

He also claims to have stolen the crown jewels: Merlin's crystal ball and a mummy from a Pharaoh. But he desired the crystal coconut to cure his toothache, and also because he believed it rightfully belonged to him. However, he is capable of compassion, taking the blame for destroying his home swamp to help his lost twin, Klump.

Skurvy makes his first appearance in the episode "Booty and the Beast". Along with his shipmates, Kutlass, Green Kroc, and Polly Roger, Skurvy attempts to steal the legendary Crystal Coconut. He believes it to be his birthright as his great-great-great-grandpappy, Quint Scurvy, was the one who first discovered it and brought it to Kongo Bongo Island.

Capturing Donkey Kong and Diddy Kong, Skurvy's theft seemed to have gone on without a hitch. However, an interference came in the form of an abnormally large Klaptrap named Junior. Junior managed to free Donkey and Diddy and during the fight between the Kongs and Skurvy's crew, Junior ate Skurvy's ship. After this disaster, Skurvy was sent packing along with his crew (minus Polly Roger who joined the Kremling Krew).

In the episode "Bug a Boogie", Skurvy tries to steal the Crystal Coconut once again, and this time succeeds and even manages to steal everything in Cranky's Cabin along with it. Unfortunately, Skurvy loses the coconut once again after he is tricked by King K. Rool into giving it back. Skurvy's next appearance was in the episode "Ape-Nesia", where he tricks an amnesia-stricken Donkey Kong into thinking he was Skurvy's first-mate, "Donkey Croc". Skurvy manipulates Donkey into stealing various objects, including the Crystal Coconut. Eventually, Donkey regains his memory and tricks Skurvy, along with K. Rool, into falling into a banana peel ridden trap. After falling for the trap, both Skurvy and K. Rool gain amnesia.

The last appearance of Skurvy was in the Christmas-themed episode, "The Kongo Bongo Festival of Lights". This episode revealed much of Skurvy's origin, with the most startling revelation being that K. Rool's general, General Klump, was Skurvy's long-lost younger brother. It was revealed that after Klump had accidentally caused a large fire that devastated his and Klump's family swamp, Skurvy in a show of brotherly love took the blame for the accident and was banished from the swamp. The end of the episode reveals that Klump had planned on leaving the Kremling Krew and joining Skurvy's crew, much to the protests of K. Rool.

"The Kongo Bongo Festival of Lights" seems to reveal why Skurvy was so cold-hearted as to do something as bad as break the Kongo Bongo Festival truce between the Kongs and the Kremlings (something even K. Rool wouldn't do). It seems that losing Klump gave Skurvy the philosophy that if he couldn't "steal back what was lost", he could "steal everything else". 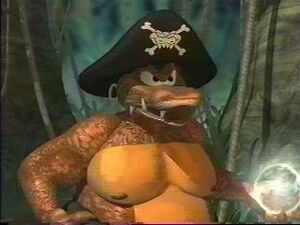