Jigen is the current known leader of the Kara organization and strongest member. Calm and collected, Jigen is able to inspire absolute authority over the members of Kara with his power. He is the adoptive father of Kawaki. He has the kāma seal and he managed to give Kawaki the kāma seal making him into a vessel. Kawaki managed to escape from him and he tasks his members with retrieving him. He later on attacks Konoha personally and deals Naruto and Sasuke, the nation's strongest shinobi, a crushing defeat, but the effort forced him to abandon his efforts.

The organization is structured with two groups the inner and the outer.

The inner members of the organization, know more about the plan of the organization and the important agendas to it. Members attend important meetings regarding issues that face their organization with the leader. Members of the inner organization have a dress code and specific tattoos and markings on their face. They are described by Kawaki as being complete monsters in terms of power, though as he and Koji admits, their power is nowhere close to Isshiki's but they are still shown to be extremely powerful. While their power level seems to vary, they are all at the very least well above even the highest level of Jonin, as Victor, who survived the Fourth Shinobi World War and yet was easily killed by Koji, confidently stated he could defeat 2 Jonin and indeed easily fended off Konohamaru and Mugino, both of them being top-level Konohagakure Jonin, Deepa easily defeated Omoi, a Jonin veteran of the Fourth Shinobi World War, and a group of Jonin, and outclassed Team 7 and even Team Shinki and Team 10 without much effort, Delta stood up to a holding back Naruto himself while managing to at times gain on him before being overpowered, Koji easily defeated Konohamaru and Boro could casually fight off Team 7 and Kawaki and ultimately only being defeated by the emergance of Momoshiki from Boruto. In fact, Boro and Code are even confident they could retrieve Kawaki from Naruto.

The outer members are not guaranteed too much information as their inner members. They do not appear during the important meetings for the organization. They are instructed by the inner members to carry out missions for them.

Kawaki is the vessel that the organization refers to. Kawaki was bio-engineered by the organization and given the Kāma seal that gives him a lot of power. However, Kawaki escaped from the organization because of the abuse he suffered from them. He fought against Garō and killed him but ended up using too much power and got taken away by the Hidden Leaf Ninjas. He wants to get rid of the kāma seal.

At some point during the new era after the Fourth Great Ninja War, Kara's name begins to emerge in some parts of many ninja nations. They became infamous for using cursed seals and the seals that are not cursed as well. Jigen adopted Kawaki to be his son but later attempted to the kāma seal on other boys but they all died. Kawaki was able to survive receiving the kāma seal and becoming Kara's "vessel". After Momoshiki Ōtsutsuki's invasion of the Hidden Leaf Village and his abduction of Naruto Uzumaki, the Seventh Hokage, the Kara organization was wary of Momoshiki and his intentions. Members of the organization presume that Naruto defeated Momoshiki. Unbeknownst to them, it was Boruto who defeated Momoshiki.

First Attempt at Retrieving the Vessel

A couple days later, Koji and Delta appeared at the entrance to the Hidden Leaf Village. Koji tells Delta that the villages defenses dropped since the last world war and that people matching chakra signatures can get into the village. Koji infiltrates the village to find Kawaki and also evades Delta's surveillance of him. Koji was able to locate Kawaki at Naruto's house. After some time, Delta manages to infiltrate the Hidden Leaf Village setting off security because of her unrecognizable chakra. She confronts Naruto, Boruto, Himawari, and Kawaki and tells Naruto she wants Kawaki. Naruto refuses to give him to her and they fought. As the battle ensues, Kawaki intercepts a laser beam attack from Delta and manages to lose a piece of his arm as a result. As the fight rages, Delta ends up getting defeated by Naruto. Before Naruto can retrieve her to gather information, she self-destructs in an explosion. Unknown to Naruto and the others, Delta is revived later with the help of the drone that witnessed the entire battle. After throwing a tantrum, Delta tells Jigen that she notices that Boruto Uzumaki has the kama seal.

Jigen's Meeting and Victory Against Naruto and Sasuke

After quite a while, Jigen personally decides to retrieve Kawaki and teleports to Konoha, resulting in him and Naruto finally meeting. After Jigen easily defeated Naruto, he tries in vain to get Kawaki to come back, accidentally causing Kawaki to progress kama to the point he grew a horn just like Jigen could, astonishing Jigen with his growth. Soon, Naruto recovers and the altercation between them quickly escalates into Naruto being overtaken and sent to another dimension after he refused Kawaki's surrender. Even after Sasuke came, Jigen displayed his overwhelmingly god levels of might and after a prolonged battle, once he was stalemated by Naruto and Sasuke, he used the full power of Isshiki Ōtsutsuki to decisively overpower and critically injure them, sending Sasuke into escaping and sealing Naruto because he contains the Nine-Tails and possibly to use Naruto as a hostage but the battle heavily weakened Jigen, ultimately ceasing his efforts to retrieve Kawaki and forcing him to be treated by Amado for extensively using his powers, while Boro is sent to guard the container from anyone who attempts to take it.

Kawaki, Boruto, Sarada, and Mitsuki appears in the dimension where Naruto and Sasuke fought against Jigen. While in the dimension they encounter Boro who guards the container where Naruto is sealed in. Boro was pleased that both Boruto and Kawaki had came before him as he could take both vessels back to Kara and he fought against them all. Although his overwhelming power and unique abilities allowed him to maintain the upper hand over Team 7, Team 7 gradually managed to counter his disposal, first negating his Dark Cloud with antibodies Mitsuki managed to get from Boro's blood and in time figuring out how to negate his insane healing powers by destroying his core, which Sarada did successfully. Boro was left mutating as Team 7 freed Naruto and though he attacked them again and defeated them all, Boruto, possessed by Momoshiki, was able to effortlessly destroy him.

With Jigen now critically weakened, Koji returned to the base intent on killing him and Amado was revealed to be a conspirator of Koji and after getting rid of Delta, Amado was sent to Konoha seeking asylum in exchange for information while Koji went to battle Jigen. 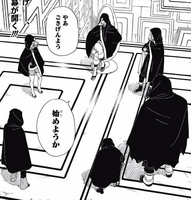 Retrieved from "https://villains.fandom.com/wiki/Kara_(Boruto)?oldid=4033293"
Community content is available under CC-BY-SA unless otherwise noted.