Kara is a supporting antagonist in the 2015 global action blockbuster hit Furious 7, the seventh installment of the Fast and the Furious movie franchise.

She was portrayed by wrestler Ronda Rousey.

Kara is the chief bodyguard for a billionaire prince of Abu Dhabi. The team arrives at the tower, and Kara notices Letty and stares her down when she sees her talking in her earpiece. In order to get into a secure room, Letty knocks out a male guard and drags the body inside the room. After hacking the security system for Tej, Letty leaves the room.

However, when she opens the door, Kara is leading the guards down the hall. Letty makes an attempt at humor, suggesting she knocked the guard out with her charm. Kara, however, is not amused and remarks that she isn't that charming. Letty tries to slam the doors shut but the other guards kick them open and begin to fight her. Kara orders the rest of the staff to lock down the building due to the intrusion.

The building begins to lock down, while Letty continues to fight Kara's colleagues, as Kara watches and waits. Letty defeats the three women, and gets ready for Kara, who says that she is glad Letty showed up, as these parties bore her to death.

Kara jumps down and punches Letty, as the two of them engage in a fierce fight in which Kara uses her martial arts skills. The fights leads outside of the room and Letty and Kara run into the railing and both fall over the edge and onto the DJ system. Roman helps Letty up, but Kara continues to lie there, even as Deckard Shaw invades the party, leaving her status unknown. 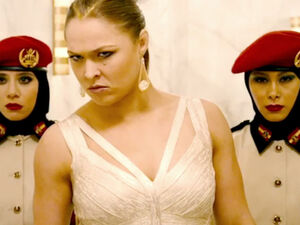 Kara with her two female bodyguards of the prince.