Karai is a major antagonist-turned-protagonist of the 2012 Teenage Mutant Ninja Turtles show on Nickelodeon. Like other versions of the character she is the Shredder's disciple, adopted daughter and a high-ranking member of the Foot Clan. However, unlike most adaptations, Karai is the daughter of Splinter and was taken by the Shredder when she was just a baby. Since then she was trained and, unknowingly, adopted by the Shredder. Shredder also lied to her that he is her real father and that Splinter had killed her mother. Since then Karai wanted revenge on Splinter for the death of her mother. However, after she learned the truth, Karai wanted revenge on the Shredder for deceiving and manipulating her for years. And after she was accidently dropped into a vat of mutagen, Karai now has the ability to mutate into a snake/human hybrid at will.

She is voiced by Kelly Hu.

Karai first appears in the episode "New Girl in Town" in which she crosses paths with Leonardo. Though she effortlessly overpowers him in their first fight she lets him live, much to her master Shredder's fury.  She later runs into Leonardo again and duels him, seeming to be at least his equal but possibly a little better. During the duel Karai attempts to seduce Leonardo, who resists and in turn attempts to get Karai to admit to having a streak of heroism inside her, to which she brushes off. She later attempts to convince Leonardo to help her steal a sword on display, to which he refuses. Leo again attempts to reason with Karai, but again she rebuffs him. However, she does save Leonardo and Raphael from Snakeweed when the Mutant attacks them, giving Leonardo hope that there is good in her.

However, in Karai's next appearance "Alien Agenda", she betrays the Turtles during a battle with Kraang forces, leaving them to fend for themselves against both the Kraang and also a mutant monster that Karai accidentally created, also mocking Leonardo when he tells her that he trusted her. While the turtles fight, Karai gives Shredder a piece of Kraang technology, managing in the process to convince him of it's worth.

Karai's next appearance is "Enemy of my Enemy", where upon learning of the threat the Kraang pose seeks an alliance with the Turtles, who are reluctant to trust her again. Though Leonardo manages to convince his brothers to trust Karai, he later goes along with their plan to try and take down the Shredder when he shows up to claim some weapons with which Karai planned to take down the Kraang.  Upon realizing that the Turtles took advantage of their partnership, a hurt Karai angrily condemns Leonardo and from then on goes from a friendly opponent to a hateful arch-enemy.  Her subsequent appearances reflect this change in personality, her previous sociable and friendly personality having been replaced with sadism. Her last Season 1 appearance was in the second part of the finale, where Splinter learned while fighting Shredder that Karai was in fact his and Tang Shen's daughter Miwa, who Shredder had taken as his own the night he killed Tang Shen, raising her to hate her biological father under the lie that he was Tang Shen's killer and not him. She has yet to learn the truth.

She reappears in the second season now commanding robotic Foot Ninjas with the ability to adapt to their opponent's moves. Shredder leaves to Japan on business and instructs his daughter to do nothing while he was away (and threatens to hurt her if she does not obey him). Nevertheless, Karai, in an attempt to get revenge on Splinter (who she still believes killed her mother) has her robot Foot Ninjas attack the turtles to try and use them as bait. The plan fails, and Karai is left defeated by Leonardo, who warns her not to endanger his brothers or sensei again. Following this, Shredder warns Karai not to disobey him again, but she ignores him and sends more Foot-Bots after April O'Neil, as well as the Kraang's new elite Foot-Bot. However, once this new Foot-Bot (who Mike dubs "Chrome-Dome") tracks April down, it attempts to capture her for the Kraang rather than kill her as Karai had wanted. Enraged at this betrayal, Karai attacks the Foot-Bot, prompting it to attack her in retaliation. Once the Turtles arrive, Karai is beaten back and forced to retreat.

Karai later appears again in "The Manhattan Project" where she tries and fails to capture the Turtles. It is in this episode that Splinter reveals to the Turtles (and later April) that Karai is his daughter. When Shredder returns, he brings a new assassin with him named Tiger-Claw. Karai takes an instant dislike to him, especially after Shredder has him replace her as his new second-in-command. The two later capture Splinter after using the Turtles as bait, and Splinter and the Turtles try desperately to convince Karai that he is indeed her father. Though she refuses to listen, she does urge Shredder to give Splinter a fair fight rather than kill him while he's helpless. She later admits that she doesn't know why she did this, but seems to show some discomfort when Shredder tries again to kill Splinter. She is last seen overhearing Splinter, April, and the Turtles discuss how Karai is the former's daughter, suggesting that she has now finally come to accept the truth.

Her subsequent appearance in "The Wrath of Tiger Claw" shows that she is indeed coming to accept the truth, but remains conflicted. When Tiger Claw returns seeking vengeance ont he Turtles and Splinter, Shredder orders Karai to help him. Tiger Claw attempts to use Karai's knowledge of the Turtles to his advantage, but Karai continues to have doubts about her true parentage and Shredder's sincerity. After losing the will to continue threatening Murakami for information, Karai seeks out April and confesses to her that she is beginning to believe that Leonardo and Splinter where telling the truth all along. Leonardo and Donatello intercept the pair and Karai claims to now believe Leonardo. In actuality she remains uncertain and discreetly alerts Tiger Claw to her position at the Turtle's lair. Upon reaching the lair though and seeing the pictures of her mother Karai realizes that Splinter is indeed her father, at which point she regrets her alerting Tiger Claw to the Turtle's location. She helps them lead Tiger Claw away from the lair and ultimately attacks him. However she is defeated and returned to the Shredder. She demands the truth from him and he admits that Splinter is her father, before then locking Karai up for betraying him. She is later freed by the Turtles after failing to escape on her own, and embraces them and Splinter as her new family. However, her desire for revenge causes her to return to the Shredder with the intent of killing him in retaliation for everything he did to her. Shredder defeats her in the ensuing fight (his teaching her everything she knew ensuring that he knows exactly how she will fight) and then uses her as bait to lure Splinter and the Turtles to him.

Tragically, in the ensuing fight Karai is dumped into mutagen Shredder had prepared for the Turtles, and in the process is mutated into a snake-like creature that is completely feral. She attacks everyone in sight before Splinter is able to make her remember him. However she soon becomes feral again and flees, injuring Raphael in the process with new acid spit. Afterwards though she is shown to be able to transform back into a human, with the only lingering signs of her being mutated being having a snake's eyes, tongue, and fangs.

Karai makes three appearances in the season 2 finale, The Invasion. In the episode's beginning, Shredder has flashbacks of key moments in her life, including her training and mutation. Then, she appears shortly as Casey and Raphael are looking for her. Then, at the very end of the second part, she saves Splinter from drowning, gently nuzzling him awake before slipping away into the water.

As a human she is shown to be slightly taller than Leo (and April). Karai has dark black hair that is dyed blonde in the back with angled bob cut and two notable strands of her hair falls over her ears. She wears several black earrings and red eyeliner on the top of her eyelids, which have brown irises. Karai always wears silver armor, black material worn under her armor, traditional Japanese shoes, and a purple belt with a design on it alot like the Shredder's. She does have a civilian outfit as well, with a punk-esque design with worn jeans and a leather biker jacket with metal studs.

As a mutant she is a two armed white and purple serpent with green eyes, snake heads instead of hands and with her armor melded into her skin.

As a human her skills as a kunoichi are so great that she can take on Leonardo one-on-one or all four turtles at once. As seen in Enemy of My Enemy Her primary weapon of choice is a Tantō (a short yet sharp Japanese blade).

As a mutant serpent she has incredibly fast reflexes, an amazingly strong tail that can be used for whipping, constricting and crushing, and she can spit blinding venom.

She is also shown to be able to morph between her human and mutant form.

Karai in her first appearance

Karai attempts to reason with her father in "Alien Agenda"

Karai in her alias "Harmony"

Karai and Leonardo connect with each other.

Karai in her snake form

Snake Karai attacks her own father

Karai in her semi-mutated form 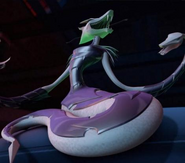 Add a photo to this gallery
Retrieved from "https://villains.fandom.com/wiki/Karai_(TMNT_2012)?oldid=957457"
Community content is available under CC-BY-SA unless otherwise noted.