Member of the Aogiri Tree

Mutilating corpses
Cradling with headless bodies
Obsessing over his "lover"

Use the Aogiri Tree to survive.

He is a ghoul and is a known serial killer who's crimes have been killing people and mutilating their dead corpses. This has lead to an investigation by the C.C.G. and must avoid it by going undercover as a Taxi Driver in Tokyo. He is a member of the Aogiri Tree and acts as an information broker for the organization. He has a deeply crazed obsession with investigator Tooru Mutsuki.

He is voiced by Hiromichi Tezuka in the Japanese version, and David Matranga in the English dubbed version.

Saeki is a tall and slender man with black hair and a lanky appearance. He has an undernourished look and often wears a severe and forlorn expression. He wears a dirt longsleeved buttoned shirt with dark pants. He also has a dark red cloak as a member of the Aogiri Tree and his mask is a small piece that covers the lower half of his face similiar to Tatara.

Karao is a morbid, unstable, and loathsome person. He has a twisted personality stemming from the fact that he has killed multiple people in the past and that he often speaks of his "lover" while cuddling with a headless corpse of one of his victims. He tends to stalk women in particular as well. His apartment is littered with knives, scissors, and polaroid pictures already adding to the fact that he has a severe case of mental instability. However, despite his aberrant and psychotic side, Karao does have another side to his personality.

It is later revealed that Saeki is actually quite careless and easily scared in general. He is cowardly in general as he has seen panicking whenever he is being chased by both the CCG and the Tokyo Police. During the multiple incursions with the Quinx Squad and Serpent (Nishiki Nishio), he often observes the battle and quickly tries to avoid confrontation with either side. He speaks rather calmly and nicely to Hinami and Ayato and it's revealed that he can't relate to others well and that rejection pushes him to violent extremes. He was at one point in time, rejected by a lover in the past and that is why Saeki obsesses over a lover and believes that Mutsuki would replace the lover he lost.

As a child, Saeki witnessed his mother being cannibalized by his father to survive. He grew up in the mountains surrounding a small village where he was forbidden by his father to go outside. After his father abandoned him for over a month, Saeki was forced to venture into town for food. There, he met a kind-hearted girl named Minomi who taught him to read and write. Eventually, Saeki's father returned and after discovering the relationship between his son and Minomi, killed and ate her. In a rage, Saeki killed his father and fled.

Karao Saeki is first seen in his cab observing Nobu Shimoguchi as him and his team investigate the latest crime scene all the while he cradles a headless corpse while being surrounded by disarray. During this time, both Shimoguchi's Team and the Quinx Squad have been investigating him but since Shimoguchi hasn't come up with any results to Akira Mado takes over and tows to catch Torso within the next month. The investigation eventually leads to him being caught and discovered by the CCG as a taxi driver in Tokyo who uses his taxi to smuggle and hide the bodies of his victims that he lures in. Haise Sasaki then interrogates Donato Porpora to which he informs him that Saeki is well integrated into ghoul society and is a mentally unstable and "picky eater" who behaves unusually for a ghoul. Later on, Saeki is hailed over by Hinami Fueguchi who gives him a flash drive from "The Tree" (the Aogiri Tree) and they discuss rumors surrounding the Quinx who are pursuing him.

Chie Hori then finds and gives information about Saeki to Kuki Urie and the CCG finds out that Torso's car is a foriegn brand. Weeks later,Tooru Mutuski finds him and enters into his cab and has a short talk with Torso. He then finds out who Mutuski is and he slashes open his passenger shirt resulting in Saeki getting more attacking and he ends up attacking him even more. This however, results in the other Quinx Squad members to arrive and he ends up engaging them in a fight until he leaves after NIshiki or Serpant, starts attacking him.

Torso's home gets discovered at one point and is later raided by Shimoguchi's Team which causes him to panic. The team finds bodies all over his apartment that he's been hoarding along with the information he was given that was handed over to Aogiri for some reason. The team is then ambushed by Ayato Kirishima who slaughters all of Shimoguchi's subordinates and leaves him severely injured. Karao is then rescued by Ayato and although frightened, he convinces Ayato to have him join Aogiri and he accepts, which makes Saeki an official member of the Aogiri Tree. Saeki joins Aogiri, believing that he can use them to his advantage while he obsesses over Mutsuki.

Ayato then takes Saeki back to their current base where he sees Hinami analyze the sounds of various recordings which causes him to comment to Ayato on how amazing Hinami is. He's then surprised when Ayato tells him that she's been hired to be one of the security guards at the upcoming auction along with Ayato himself and other Aogiri members. He then thinks about

On then night of the Auction, Saeki is joined by Ayato and Hinami as they accompany him to the reception hall where the bidding is about to begin. Saeki watches in amazement as he sees humans being sold off to ghouls for large quantities of money which is more than he ever made as a taxi driver. He then gets horrified when he sees Mutsuki be brought on stage and panics as he asks Ayato on how he can participate despite the high bidding prices. He then runs away once the CCG starts launching their attack on the Auction crowd as they gun down the guests and guards at the event. He runs away with Hinami until he sees Mutsuki being dragged away by Nutcracker which causes him to chase after him but get jabbed by Karren von Rosewald so she could taste his blood.

Saeki gets up and beats her up until he's out of breath and is happy when he sees Mutsuki alive but is surprised when he starts running away which causes him to yell an apology to him about their last encounter. He then retreats along with the remaining Aogiri members after their forces had been decimated and the CCG had overrun the entire complex.

In the aftermath of the Auction Operation, Tatara calls in the other members of the Aogiri Tree to a meeting where they discuss what happened. During the meeting, Ayato tells Tatara that Hinami had been captured by the CCG and that they should try to save her. Saeki's then seen agreeing and he then thinks of Hinami and has concered thoughts for her. Unfortunately however, Tatara shoots everyone down and the Aogiri Tree officially abaonded Hinami and left her behind without care. Saeki's seen again later on where he's in a garage watching a fight between the Quinx and a group of Aogiri Members who were hired by Karren. Amongst the chaos, he tries to capture Mutuski, but he overpowers him with his newfound abilities and Saeki gets rescued by Yumitsu Tomoe when she appears on the scene.

Sometime after the extermination of the Tsukiyama Family, Saeki is seen on Rushima Island, the current headquarters for the Aogiri Tree. Saeki notices Mutuski and stalks him until he ends up taking refuge in a cave with Ayumi Hogi during an investigation into Rushima being conducted by the Hachikawa Squad. He hides in the cave and ambushes the two investigators by bashing Ayumi against the cave knocking her out unconcious and going after Mutuski who is staring in horror. He then grabs him by his throat and asks if he came to see him. He then takes Mutuski hostage and brings him to a safe place to hide out at and knocks him out. Saeki then drags him to a pit where he claims it'll be their new "home" and cryptically speaks about how they're gonna get married and about how Mutuski's eyes are attractive to him. Mutuski wakes up and he screams in horror when he finds out that Saeki had butchered all of his limbs while he was out.

Sometime later during the CCG's raid on Rushima, he kidnaps Tooru Mutsuki and holds him hostage. He's seen giving Mutuski a crown made of flowers and gives it to him as a gift. Saeki gets mad when he sees Mutuski stare at him and beats him up as punishment out of rage. Shortly afterwards, he lies down with him and explains how the beating was out of love and asks if he's happy with him and talks about his plans to bring her to a field of flowers with him. Saeki later watches Mutuski sleep and notices him having a nightmare and watches until he wakes up and asks if he was startled.

He then goes to a kitchen and cooks up a meal while asking Mutsuki about her past while feeding him. He responds back by asking about Saeki's past which he relates to him by mentioning an old childhood friend known as Minomi and explain how they were close but was killed by his father. He promised him a trip to the ocean before he died and he ends up crying out of remembering the horrific experience. He then picks up Mutuski and carries him to an unknown location which causes him to fight and try to escape, only for Saeki to quickly knock him out again. They then arrived at a flower field where Saeki was to show Mutuski, but in a psychological breakdown, Mutuski revolted and slaughtered Saeki. His mutilated corpse was then positioned on display in a cave.

As a ghoul, Karao Saeki has all of his natural abilities enhanced to a greater level including enhanced hearing, strength, stamina and speed. He has a rating of A by the CCG making him a moderately powerful ghoul. He possesses a Rinkaku Kagune which can turn into several tentacles which can be used in long-ranged attacks. He also possesses regeneration and can regenerate all of the wounds he sustains in battle.

Saeki cuddling with a headless corpse 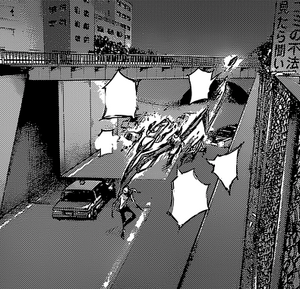 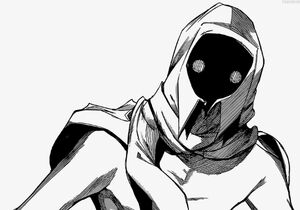 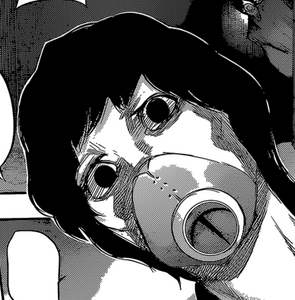 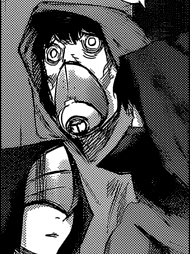 Saeki horrified at Mutuski being auctioned off