Help the Jupiter Empire to take over the Earth.

Professor Karas is the secondary antagonist of the manga Mobile Suit Crossbone Gundam. Originally appeared as a professor, Karas was revealed to be an agent of the Jupiter Empire.

Karas is a obvious social darwinist, believing that the Jupiter Empire are stronger than the earthnoids, and therefore should replace the later. He is greatly appreciated by Tobia's talent, frequently trying to convince him into joining the Jupiter Empire.

Originally, Karas was the teacher that has been supporting Tobia during his trip to Jupiter, when Tobia accidentally found out there are poison gas tanks in the cargo area of the ship they were on. Karas tried to kill Tobia for discovering the poison gas, but Kincade smashed open the cargo area, thus saving Tobia and sucking Karas into space, damaging his mental health. Later, after Tobia and Kincade subrogated the Jupiter Empire and were escaping, Karas fought them, but when he was distracted by Bernadette Briett's necklace, this gave Kincade the chance to defeat Karas.

During Zabine Chareux's betrayal, Karas, on the mobile ship Jiba tried to use it to crush the Mother Vanguard after Zabine failed to capture Berah. Karas also sent the Death Gale team to combat Mother Vanguard's MS force. Later, he went abroad Mother Vanguard to capture Bernadette and Tobia just as the Jiba was damaged. Karas later would be present during Tobia's execution by Rosemary Raspberry. He rooted for Tobia, who defeated Rosemary. He then laughed manically as Tobia escaped.

During the Jupiter Empire's invasion, Karas piloted the EMA-07 Nautilus and fought Tobia while telling him about the reason why Jupiter Empire invaded Earth. In the end, Tobia defeated Karas, who praised him for that. Karas soon noticed a Jupiter Empire soldier was trying to shoot Tobia down, so Karas spent his last moments killing the soldier while saying that a loser shouldn't take away the victor's victory just before dying in the explosion of the Nautilus. 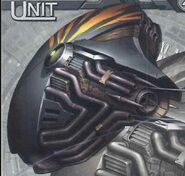 EMA-07 Nautilus
Add a photo to this gallery

Retrieved from "https://villains.fandom.com/wiki/Karas_(Gundam)?oldid=4222629"
Community content is available under CC-BY-SA unless otherwise noted.