Use his karate skills to kill as many Klaymen as possible (failed).

The Karate Master is the titular main antagonist of Klay World: Karate Master. He is an unnamed Klayman who trained karate, but soon later abuses his power by becoming a killing machine.

He appears to be an avenge Klayman, only wearing a black belt.

He appears to be depraved student who abuses his karate skills very quickly after becoming a karate master. Although he was probably was incompetent and dimwitted like any other Klayman.

Nothing is known about The Karate Master's life, other than at some point, he became a karate student for unknown reasons, but he was possibly incompetent and dimwitted like any other Klaymen.

The video starts off with the Karate Master telling his student that his training was complete and he is now a master of karate. While he warns him to take great responsibility to use his skills ethically, the Karate Master responds by punching his teacher's head and killing him. 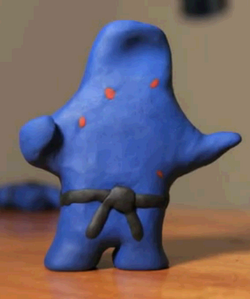 The Karate Master's last moments.
Add a photo to this gallery 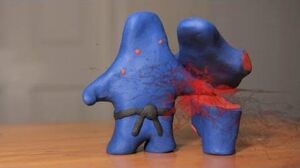 Klay World Karate Master
Add a photo to this gallery

Retrieved from "https://villains.fandom.com/wiki/Karate_Master?oldid=3538122"
Community content is available under CC-BY-SA unless otherwise noted.