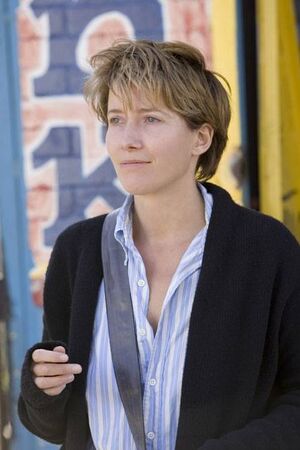 Karen Eiffel is ostensibly the main antagonist of the film Stranger Than Fiction.

She is a writer who always kills off all the main characters of her books. The movie initially takes place within Karen's latest novel which she is currently writing, where the main character Harold Crick hears the narration of the book talking about what he is doing as it happens, and is scared when he hears the voice say that he is going to die.

She was portrayed by Emma Thompson, who also played Lesa in Hoodwinked!, The Woman in Lutins, Sarafine Duchannes in Beautiful Creatures, The Yeti Elder in Missing Link and Baroness von Hellman in Cruella.

Harold goes to a doctor in literature (during time where nothing related to the story as Karen intends to write it is supposed to happen) and determines that his life is in fact a "fictional" story. Dr. Hilbert asks Harold to see if he's living in a comedy or tragedy by counting happy/unhappy moments in his life. After a while his numbers tell him he's living a tragedy, but a lucky event makes him change his mind and he forgets about his narrator saying he will die. That is, until he sees an interview with Karen Eiffel on TV and the Dr. tells him she kills off all her main characters.

Breaking the sequence of the story (and the fourth wall of reality), Harold tracks down Karen Eiffel and confronts her about his story. Eiffel initially refuses to change the ending, but is shocked at the realization that all the characters she killed in her other books were "real" people, and begins suffering a psychological breakdown. Meanwhile, Harold's professor, who has been given a finished draft of Eiffel’s planned story, tells him that the death she has planned for him would be more deep and meaningful than however Harold would eventually die if the story spared him, and he gradually comes to accept his fate.

On the day the story ends, Harold is hit by a bus while trying to save a child in the street due to setting his wristwatch a few minutes off earlier in the film/book (which was when he first heard the narration say he was going to die), but Karen Eiffel is unable to bring herself to finish the sentence confirming his death.

Mr. Crick then wakes up in a hospital, severely injured but very much alive, where he is told that he miraculously survived due to a piece of his watch becoming lodged in his wrist during the crash and stopping him from bleeding to death. Thus, Karen Eiffel created a truly ironic twist by having the watch that was originally supposed to have caused Harold’s death save his life in the end, and making the anthropomorphized watch the one who "died" heroically.

Ms. Eiffel visits Dr. Hilbert asking him how he liked the book. He answers, "It's ok, nothing more.", and Karen announces she's rewriting the rest of the book to have it make sense with the ending. And so it was, a wristwatch saved Harold Crick.