Abuse Peter (succeeded for a while, then failed).

Karen Griffin is the main antagonist of the Family Guy episode "Peter's Sister". She is Peter Griffin's abusive sister and a wrestler who performs under the name of "Heavy Flo".

She was voiced by Kate McKinnon, who later played Kellyanne Conway in Saturday Night Live and Régine Le Haut in Leap! (originally released under the title Ballerina) in the American release.

When Karen drops in to visit for Thanksgiving, her niece Meg Griffin discovers that she treats Peter the same way that he treats her. Although amused at first, she realizes that Karen takes things too far and decides to work with Peter to even the odds. She even realized that Karen's abusive treatment is the true reason why Peter has been abusing her (due to Meg's resemblances with Karen), to which Peter sadly confirms. In other words, Karen is somewhat responsible for her brother being the man he is today.

Peter eventually stands to Karen during a boxing fight, which Meg helps out by smashing a chair onto Karen's head, putting her into a coma. Peter thanks Meg for her help, even apologizing for his treatment towards her, and they both hug each other in forgiveness.

It was later told that Karen is in a hospital still in the coma thanks to Meg's beating (as the chair Meg used to hit Karen wasn't a prop but a real one), but neither Peter nor Meg cared about this as they believe that she got what she deserved. Peter even refuses to check if he's the same blood type for a transfusion. It's likely that Karen died. 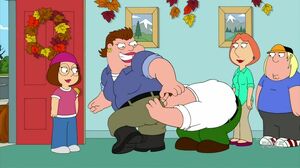 Karen Griffin's Evil Grin as she farts on Peter's face.