Transforming into a Nova Beast

Trying to kill the Gransazers

Karin Saeki is an Akelon alien working for the Warp Monarch who took the guise of the deceased physicist, Karin Saeki. She is the main antagonist of episodes 1-12 of Chouseishin Gransazer.

She was portrayed by Mika Chiba.

Upon her arrival on Earth, the Akelon took the guise of the deceased physicist Karin Saekio to survive within Earth's atmosphere. Karin was able to convince the Wind Tribe to go against the other Gransazers, telling them that they were a threat o the planet and must be destroyed. Karin also manipulated Akira to ensure his loyalty to her. When Ryoko and Jin leave her, Karin reveals her true Akelon identity and tries to kill them. However, Tenma, Mika and Go show up and hold her off. Akira later sees Karin for who she really is while she battles Tarious. He goes to assist Tarious and, as Remls knocks her off the building to her apparent death.

However, Karin managed to recover before she could be autopsied. The Akelon then headed to Ryujin Mountain and summoned her ship to heal her injuries. Karin then attacked Naoto to lure out the Gransazers. The Flame Tribe soon show up and beat her back, prompting Karin to transform into her Nova-Beast form. The Gransazers then summon Garuda and Dolcross to combat her. Karin at first holds them of, but quickly falls back to heal her burn injuries by Garuda. She absorbs Akira into her, but Remls is able to breaks free from her body. The three Gransazer tribes then destroy Karin's spaceship, allowing their Chouseishin to eliminate her. 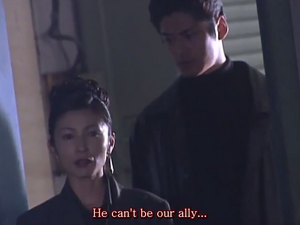 Karin with Akira
Add a photo to this gallery

Retrieved from "https://villains.fandom.com/wiki/Karin_Saeki?oldid=3538136"
Community content is available under CC-BY-SA unless otherwise noted.