Avenge Zeon's defeat in the One Year War.

Karius is a soldier of the Delaz Fleet acting as Anavel Gato's right-hand and a supporting antagonist in the 13 episode OVA Mobile Suit Gundam 0083: Stardust Memory.

Karius served as a Mobile Suit pilot in the Principality of Zeon military under Anavel Gato during the One Year War. After the end of the One Year War, Karius ventured to Anavel's personal fleet and rejoins his former commander. He later accompanied Gato when he went on to serve under Aiguille Delaz and the Delaz Fleet.

As Operation Stardust commenced, Karius was ordered by Gato to take Nina Purpleton to the Axis Advance Fleet before the end of the Operation. This later wound up saving his life, as it saved him the fate of being killed by the Federation forces. It is unknown what happened to him afterward, though it is presumed he stayed with Axis Zeon. 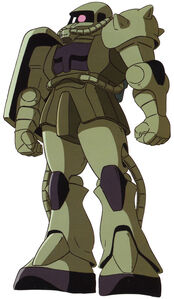 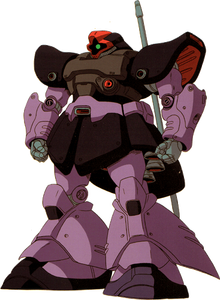 MS-09R-2 Rick Dom II
Add a photo to this gallery
Retrieved from "https://villains.fandom.com/wiki/Karius?oldid=3602255"
Community content is available under CC-BY-SA unless otherwise noted.