Karl Coven is an alien serial killer from Peter David’s Captain Marvel series. Convicted for the murder of seventeen people and let free from death row, Coven hunts down Rick Jones but gains the attention of Captain Marvel who he partners up with in the pursuit of law and justice.

Karl Coven was a serial killer, convicted for the murders of seventeen people, four women and three children included. At various points in his trial, Coven claimed to be of alien origin and after his execution by lethal injection fails, his claims are proven true. Immediately after his botched execution, Rick Jones testifies against him again, reiterating to the court that Coven had murdered the Wyler family three years ago. Rick says that he was present for the murder as he was paralyzed by the same gas he used on them and as he watched from the bushes, Coven peeled their skins away and used their organs for ritualistic sacrifice. Despite Rick’s chilling testimony, the judge presiding over the case begrudgingly lets Coven free on account of Coven having served his sentence already and executing him again would be considered “Cruel and Unusual Punishment.” Immediately after his release, Coven tracks down Rick Jones to his apartment and fires a sniper round at him, hitting the side of Rick’s head and severely wounding him. Having missed his shot, Coven goes down to Rick’s apartment to shoot him dead but by accident, Coven summons Genis-Vell from the Microverse and sends Rick there in his place.

Genis threatens Coven with annihilation but says he doesn’t want to because he finds the serial killer interesting and wants to learn law and order from him. Accepting Genis’ offer, the duo observe a scene where a small alien is fleeing from his abusive master until Spider-Man enters the fray to rescue the victim. Coven wonders that since Genis is Cosmically Aware and omniscient, he should know all the facts so trying them is pointless. Genis retorts that he’ll only consider the facts if the evidence is presented before him, something he considers delightfully insane. The serial killer then wonders how Genis brought them to New York with Genis replying that he did so mysteriously like God and convinces Coven that God is insane in the way he designed the world.

While Spider-Man is in for the fight of his life, Genis intervened and knocks Caffrey out with his own whip. In terror of Genis, Spider-Man’s senses go haywire in his presence and is promptly knocked out with a kick to the head. Hours later, Spider-Man, Caffrey and Tlaango are put on trial with Genis acting as the judge and Coven as the prosecutor. Despite Rick’s protests, Genis and Coven hear the cases made by the plaintiffs and defendant. Upon waking up, Caffrey is beaten by Coven for standing up without permission and threatens that it’s his first and only warning, demonstrating his newfound Cosmic Awareness he received from Genis. It’s concluded that Caffrey and Tlaango were engaging in a sadomasochistic master-slave scenario with Caffrey taking it a little too far something Spider-Man immediately expresses embarrassment over. When Caffrey rises and threatens to report the trial to his home planet’s government, Coven steps in to kill Caffrey for contempt of court by snapping his neck. While Tlaango mourns for his master’s loss, Coven revels in his newfound power and Genis adjourns the court.

After the trial is over, Coven continues to stalk Rick to his apartment. Despite Genis claiming that he won’t kill Rick since Coven will lose the power that he received, the serial killer still makes his attack on Rick. This time however, Coven grabs another victim, Lucy Harper, while riding on his flying motorcycle. While grabbing her arm, Coven mocks Rick by saying he might drop her if asked to put her down and that Rick will suffer even more guilt. As Lucy begs not to be killed, Coven lets her live only because if she’s dead, he can’t hear her scream though he wonders if he can bring her back from the dead to subvert that. As Rick threatens to shoot him, Coven brags that if he shoots, he‘ll kill Lucy and have more guilt piling up on his conscience. While Rick tries to get Genis into the fight, Coven boasts to Lucy that he made her husband beg like a baby for his life before he was killed.

Sharing his Cosmic Awareness with Lucy, he shares a vision of that fateful night. Coven tells her his death was unnecessary since her husband pulled him over for a broken tail light that he insisted would be fixed and was willing to accept a ticket since he was in a good mood. Things went wrong when Harper looked into Coven’s trunk due to suspicion about his tattoos. Horrified, Lucy sees a vision of mutilated remains in Coven’s trunk. The sight of that stunned her husband giving Coven enough time to snag his sidearm and put the gun in Harper’s mouth. Soiling himself in fear, Coven made Harper strip from the waist down so he wouldn’t disgrace the uniform. Lucy tries to jump off but Coven grabs her and sadistically offers to show her husband’s face right before he peeled it off.

Sparing Lucy anymore of Coven’s cruelty, Rick takes a shot at him and blasts him into a building that collapses on him, knocking him out for some time. Lucy wonders if they should arrest him but Rick insists no jail will hold him and thinks about getting Genis to cut off Coven’s powers. Recovering from that assault, Coven follows Rick and ambushes him and Lucy. He chides Rick into summoning Genis to stop him but he boasts Genis would just stand there and watch as he takes Lucy apart, piece by piece. As he and Rick grapple with each other, Coven admits he needs Rick alive but says he can have lots fun with him later.

While Rick holds onto him, Genis drains Coven’s power entirely who demands it back. Lucy smashes a marble collection case to the floor and trips Coven as he keeps demanding that power back for how good it tasted though not as good as Rick will taste to him. Coven trips over the marbles and is held at gunpoint by Rick who he then chides as he asks if he’ll be turned back into the police or if Rick will kill him instead. Coven insists Rick wants to kill him but he doesn’t have the courage to do so though suggests Lucy might. Rick asks Lucy if she wants to make Coven suffer before he dies like she had wanted before but she reminds Rick that he said heroes are supposed to stand for something and if he hurts or kills Coven, he’ll be no better than he is. Rick agrees but says he’ll just have to live with it as he shoots Coven in the groin.

Mocking Coven in turn for his lost manhood, Rick chides to Coven that they don’t have to stand for him anymore. Coven seethes at his predicament but smugly “welcomes Rick to the club” as Genis screams at Rick to kill Coven immediately. Coven starts to power back up as Genis loses his Cosmic Awareness due to letting Coven possess it for too long. The serial killer reminds Rick that he’s an alien and that’s how he survived execution. As he gets back up, he revels in the fact he’s better with Cosmic Awareness than Genis is as he doesn’t need the Nega-Bands to control or harness his energy. Now with the complete Cosmic Awareness, Coven takes on the familiar starry visage as Genis while the superhero seemingly dies in the Microverse.

Coven approaches Lucy to torment her some more by telling her that her husband’s last words were “I want to go home” before asking her what last words will be. Mocking her final words as he’s about to kill her, he compares himself to Rick by telling her he was worse since Coven held no delusions that he was anything more than a killer. Moments before he attempts to kill both Lucy and Rick, Tlaango returns with soldiers from his home world to execute Coven for the murder of Caffrey, confusing Coven for Genis due to the visual starfield effect from his Cosmic Awareness. Coven goads Ulzak and his Borozil troopers into firing but a familiar voice tells Coven that he’s been tried and sentenced to death for being too stupid to live. Identifying the source as Genis, Coven suddenly loses his powers and reverts to his normal self while he is blasted by the Borozil armada with nothing but charred ash and severed limbs remaining.

Karl Coven is a sadistic serial killer responsible for the brutal murders and skinning of seventeen people including four women and three children. At no point does Coven ever express regret for these actions and outright revels in reminding Rick about the day he witnessed the Wyler family murder and ritualistic sacrifice. In every encounter Coven has with Rick and Lucy Harper, he is quick to mock them for the judicial system’s failure in stopping him and rubbing in the fact that they’re powerless to stop him. Coven goes so far as to force Lucy to partake in a vision of the night when he killed her husband.

His relationship with Rick’s superhero counterpart, Genis-Vell, isn’t much better as he wanted to kill Genis upon first encounter but backed down due to realizing Genis’ incredible power and taking his offer in enforcing the law. Even at his least dangerous, Coven still manages to be cruel as he violently disciplines the wrongly accused Caffrey into sitting down and then later breaking his neck for holding the court in contempt when he protested the farce. After he executed Caffrey, he reveled in the power he now received from Genis.

With his newfound Cosmic Awareness, he immediately takes to abusing it by stalking Rick and Lucy to torment them while Genis is away in the Microverse. Despite needing Rick alive, he takes pleasure in causing him pain and guilt tripping him. When he is deprived of his power by Genis, he gets angry at both of them and demands it back. This is a ruse as he was absorbing Genis’ power and openly remarked he was a superior Marvel since he didn’t need the Nega-Bands to harness his energy. At his core, Coven is a cruel and ruthless serial killer who emotionally abuses his victims before brutally murdering and skinning them and holds a false friendship with Genis that he easily breaks once he is in a position to do so.

Before his ascension, Coven was an alien immune to lethal injections. He was also a capable melee combatant with considerable strength to overpower Rick Jones, himself a trainee of Captain America. He’s also a skilled marksman as he fired a sniper rifle into Rick’s apartment from the top of another building though he missed his shot and grazed the side of Rick’s head.

Once he gains cosmic powers from Genis, he is capable of flight both with and without his motorcycle, sharing visions with others that display their memories, enhancing his physical attributes and possibly teleporting and raising the dead. Most strikingly was his ability to drain Genis’ Cosmic Awareness even after he had seemingly lost it though Genis may have allowed that to happen. 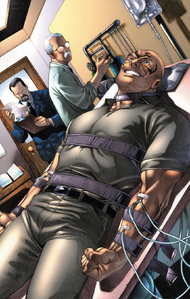 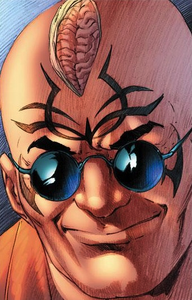 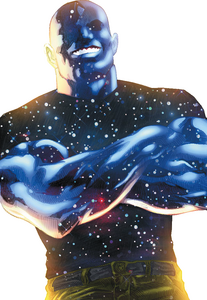 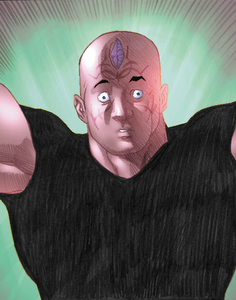 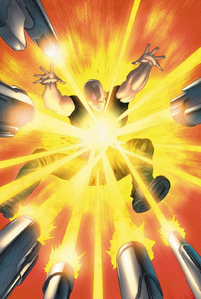 Coven meets his end.
Add a photo to this gallery

Retrieved from "https://villains.fandom.com/wiki/Karl_Coven?oldid=3465752"
Community content is available under CC-BY-SA unless otherwise noted.