Master of the Mystic Arts (formerly)

Assisting in recruiting and training their future sorcerers (formerly)

Defeat Kaecilius and his Zealots (succeeded).

Eliminate the other sorcerers of the world (ongoing).

Karl Mordo is a major character in the Marvel Cinematic Universe, serving as the deuteragonist of the 2016 film Doctor Strange. He is a former member of the Masters of the Mystic Arts and a former ally to the Ancient One.

Even though he was an ally of Stephen Strange and helped him fight against Kaecilius, he becomes disillusioned with the Ancient One, and following Dormammu's defeat, he makes it his mission to rid the world of other sorcerers.

He is portrayed by Chiwetel Ejiofor, who also played Victor Sweet in Four Brothers, Luke in Children of Men and Scar in the live-action The Lion King remake.

He eventually becomes disillusioned with the Ancient One's ideals, having witnessed Strange bend the rules of nature to defeat Dormammu and Kaecilius. Breaking off all ties with the Mystic Arts, Mordo embarks on a mission to eliminate the other sorcerers of the world, beginning with the Ancient One's former pupil Jonathan Pangborn by depriving him of his ability to walk, much to Jonathan's horror.

Not much is known about Karl Mordo's past, but he suffered a great tragedy in his life at some point, so he desired power that would allow him to defeat his enemies. Traveling to Kamar-Taj, Mordo would be inducted into the Masters of Mystic Arts, and was trained by the Ancient One to become a master. Though he initially desired to use his powers to get revenge, he would put them aside to protect the world from mystical threats, such as assisting the Ancient One in retrieving the Bow of Apollon from Jiãó ào Zhànshì.

In early 2017, while in Nepal, Mordo overhears a man named Stephen Strange asking for directions to Kamar-Taj, and decided to follow him until he witnesses Strange being beaten by muggers. Karl stops them and decides to invite Stephen to Kamar-Taj, and witnesses the Ancient One use her power to introduce Strange to the mystic arts. However, she refuses to teach Strange due to seeing his arrogance, but Mordo advises that he be trained as they need help in stopping Kaecilius and his Zealots. Once the Ancient One goes back on her initial thinking, Mordo starts to introduce Stephen to the mystic arts and trains him in how to channel energy. Karl also teaches Strange a valuable lesson in combat, as one day his fighting skills will be needed when fighting opponents.

After Kaecilius and the Zealots raid the temple, Mordo is accused by Strange by tricking him into joining the mystic arts and taking power from the Dark Dimension. Karl denies this, and accuses Stephen of cowardice and is angered at the latter for disrespecting the Ancient One. During their argument, Kaecilius returns and Strange attempts to confine him to the Mirror Dimension ends with Karl and Stephen being trapped within New York's dimension. The two fight against Kaecilius and his Zealots until the Ancient One's arrival, and the former reveals that she was harnessing magic from the Dark Dimension to remain immortal. Mordo is shocked by the revelation, as she made it forbidden to her students since the dimension was tied to Dormammu.

After witnessing the Ancient One's death, Mordo becomes disillusioned of the Ancient One's teachings and believes she caused Kaecilius' downfall. Though hurt by his master's hypocrisy, Mordo agrees to help Strange and Wong stop the Zealots and Dormammu for the greater good. During the fight at the Hong Kong Sanctum, Strange makes a bargain with Dormammu by using the Eye of Agamotto to trap Dormammu in a time loop until he begrudgingly agrees to leave the Earth for good, thus stopping Kaecilius and the Zealots. Though the threat is resolved, Mordo is even further disillusioned due to Strange breaking the nature of law, feeling that sorcerers were causing the world's imbalance by abusing magic, so he announces that he will leave the order for good.

In the post-credits scene, Mordo visits Jonathan Pangborn, a former paraplegic who regained his ability to walk thanks to the Ancient One and whom told Strange about the Masters of the Mystic Arts in the first place, and assaults him on his house. Despite Pangborn's attempts to defend himself, Mordo defeats him and strips him of his powers, bringing back Pangborn's paraplegia. Horrified, Pangborn asks Mordo why he is doing that, to which Mordo confides him that the world has too many sorcerers who steal and pervert power like him, implying that he is going to go after other sorcerers and strip them from their magic possibly until he remains the sole sorcerer in the world.

While Mordo doesn't directly appear in the film, Strange claims he's tried to kill him several times since Dormammu's defeat. 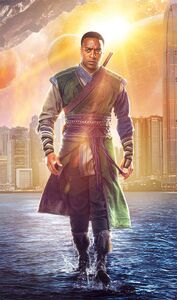 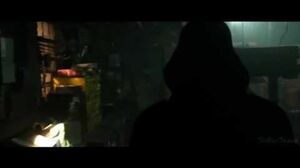