Karl Mueller was a serial killer from the Babylon 5 Season 1 episode The Quality of Mercy.

He was portrayed by Mark Rolston.

Karl Mueller was a serial Killer who believed that he needed dead souls in order to form a quire that would sing him into heaven. As such, Karl began to kill discretely, traveling rom world to world and often gaining at least one more "voice" at each stop.

In the slums of Babylon 5, Karl Mueller was eventually caught and convicted of the murder of two poor humans. As teh Earth alliance had phased out coventional Death Penalties, He was sentenced to have his mind erased and replaced with a mind that would be more suitable for the benefit of the alliance. Before he was convicted, however, Mueller had to be scanned by a psychic.

When Talia Winter scanned him, he revealed that he had killed dozens of people in his life. SHe was deeply disturbed the mental images that were offered by the serial killer. He managed to escape minutes before his execution, and while wounded, was alive and dangerous. He attempted too gain help from a human nurse with an alien healing machine, but was tricked, and had his life-force drained. 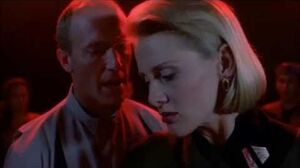 Babylon 5 Clip A Funny Murderer from the Quality of Mercy
Add a photo to this gallery
Retrieved from "https://villains.fandom.com/wiki/Karl_Mueller?oldid=2573186"
Community content is available under CC-BY-SA unless otherwise noted.