Assassin
Head of the Thule Society

Tinkering with his prosthetics.

Performing surgery on himself.
Singing.
Listening to opera.

Aiding Rasputin with his goals.

Karl Ruprecht Kroenen is a fictional Nazi scientist in the Hellboy comics, created by Mike Mignola. In the comics, Kroenen was a relatively unremarkable Nazi SS scientist, whose most distinguishing characteristic was that he always wore a gas mask and protective bodysuit, possibly due to severe obsessive-compulsive disorder and fear of bacteria.

Director Guillermo del Toro created a significantly expanded biography of the character for the 2004 film adaptation. Karl acts as the secondary antagonist of the film.

In the film, he was portrayed by Ladislav Beran.

A German scientist working for the Nazis, and a member of the Thule Society, Dr. Kroenen already active since 1920s where prior to his involvement in Project Ragna Rok, he had worked on experiments to extend life and conquer death. During that time, he was presumed to be involved in an attempt to harness the "shakti" energy force in 1930. An accident during the attempt left Kroenen injured, and the operations that saved his life left him resembling his monstrous creations and bound to live in a protective bodysuit. His later work led him to run afoul of A.N. Sandhu a number of times.

Kroenen would later became one of the top scientists for Project Ragna Rok, and a close disciple of Grigori Rasputin, along with Ilsa Haupstein and Leopold Kurtz. He was present with Rasputin at the secret ritual in Scotland that brought Hellboy to the world.

Kroenen, Haupstein, and Kurtz were frozen inside a secret Nazi base, until they were resuscitated by industrialist Roderick Zinco, acting on Rasputin's orders. Kroenen resumed work on several of his former projects, including making an "Apocalypse Army" by combining corpses with robotics. He also convinced Zinco to retrieve the head of his colleague, Herman von Klempt, from South America. Kroenen retained an affection for his colleague, though Rasputin had rejected von Klempt as unsuitable for Ragna Rok.

When von Klempt's head was re-animated, he tried to convince Kroenen to abandon Rasputin's plan - to awaken the Ogdru Jahad - and instead to use the Army to retrieve von Klempt's work in South America. Overhearing, Kurtz became furious and attacked von Klempt's head, screaming, "Rasputin is master!" In a panic, Kroenen seized a knife and killed Kurtz.

When their plan failed, an enraged Rasputin struck Zinco blind. Wandering around, Zinco accidentally pressed a self-destruct button in the base, destroying it completely and taking Kroenen with it. Although, it's turned out that he survived as many years later, he appeared in a meeting room of the Zinco Corporation with Leopold Kurtz. Around this time, he and Kurtz was tricked by Isaiah Marsten to revive the Black Flame instead of their master Rasputin with a body from B.P.R.D. Marsten then proceeded to lay waste on Zinco's collection Nazi relics, infuriating Kroenen who the saved von Klempt's head and escaped.

Sometime later, he was found by Varvara, who reawakened von Klempt and invited the two men to join her cause to rebuild Pandemonium on Earth. Kroenen became increasingly skeptical of his choice and voiced his concern to von Klempt after Varvara seemed to intentionally lead Hellboy to them. While explaining that she was hiding something, Kroenen was set on fire by Varvara, killing him.

Karl Ruprecht Kroenen was born in Munich, Germany in 1897. As a child, Kroenen was renowned as a musical prodigy with an angelic voice, his talent for opera quickly securing him a tour of all the capitals of Europe; eventually, however, the onset of puberty ruined his voice and ended his career. Consumed with self-loathing at the awkwardness of his body, he took to whipping himself with an oak branch, his pain quickly turning to pleasure as he did so; as he grew older, this mixture of masochism and self-hatred led to an obsession with body perfection, and from there, to surgical addiction. Over the course of his self-surgery, he removed his nails, his lips, and even his eyelids. As a result, he also took to wearing a custom-made mask to filter out bacteria and other elements that might damage his freshly-exposed tissues.

Once he had recovered, he made a name for himself as a talented craftsman and engineer, particularly skilled in the creation of clockwork mechanisms; an early success to his name was a nightingale capable of reproducing one of Mozart's arias. However, this gift was overshadowed once again by Kroenen's obsession: he believed that the fusion of clockwork and flesh would be the means by which he could attain perfection and purity.

33 years later in 1930, he met Grigori Rasputin and soon became his most loyal follower. Soon after, he joined the Nazi party and from there, the SS: ascending swiftly to the rank of Obersturmbannführer, he earned the Iron Cross for bravery and impressed the Nazi elite with his many administrative successes - including a period of stewardship over Auschwitz concentration camp. Eventually, Kroenen's many triumphs brought him into the Thule Society, an elite society of German aristocrats obsessed with the occult; his successes were no less auspicious - by the 1940s, he was the head of the Society. Here, he could serve Rasputin more directly, while also making a name for himself as Hitler's top assassin, eliminating troublesome individuals both inside and outside the party.

Under Rasputin's instructions, he used the resources of the Society to initiate Project Ragnarok, engineering the machinery that would conjure the portal to the Ogdru Jahad. He also accompanied Rasputin and the troops to the remote island where the summoning would take place, assisting in the activation - and defending the area from Allied troops. Though he killed a great many of them over the course of the battle, Trevor "Broom" Bruttenholm was able to throw a grenade under the portal, and Kroenen's attempt to retrieve it only resulted in him getting his hand blown off; impaled through the heart by a length of rebar from the exploding machinery, it was believed that he'd died. However, his body inexplicably vanished soon after, though the biography reports that a corpse matching his dental records was eventually found in Romania.

74 years later in 2004, Kroenen reappeared and joined Ilsa Haupstein in resurrecting Rasputin once again. After helping to unleash Sammael on the subways, he also took part in a scheme to eliminate the BPRD's leadership and lure Hellboy to Rasputin's side: when his secret workshop was raided by the BPRD, he ambushed and mortally wounded Agent Clay, before promptly switching himself off and lying down next him. Unable to resist investigating further, the BPRD took Kroenen's body back to their headquarters for an autopsy; while the now-elderly Professor Broom examined the clues that had been uncovered among his personal effects, the "dead' assassin abruptly returned to life. After a brief confrontation between the Professor and Rasputin, Kroenen stabbed Broom through the throat, killing him instantly.

Shortly afterward, Hellboy followed the trail of clues to Rasputin's mausoleum in Moscow, where he and Director Manning found Kroenen waiting in his private quarters; for the first time in the entire film, the assassin found himself effectively outmatched by Hellboy, and even deploying a spiked pit against the intruder didn't subdue him. Kroenen's part in the film ended with him impaled on one of the spikes, unable to escape being crushed under an enormous gear that Hellboy had dropped on him. In this case, Hellboy had also avenged Broom's death.

However, in the animated feature included on the Hellboy II DVD, Kroenen's head was recovered from the site by Roderick Zinco and brought to a Project Ragnarok base in Antarctica, where he located a gigantic robot exoskeleton capable of serving as a new body for the undead assassin. Soon after, Rasputin appeared and tasked his newly-resurrected disciple with one last mission, suggesting that Kroenen would have made an appearance in Hellboy III as a stand-in for Herman von Klempt.

Kroenen appears in a minor role in this movie. 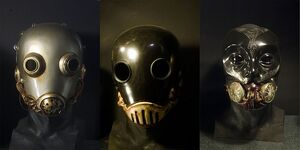 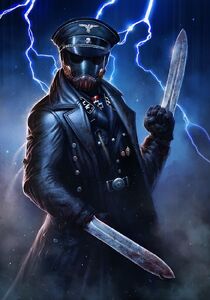 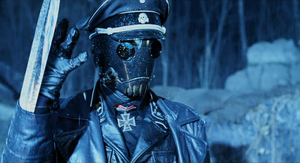 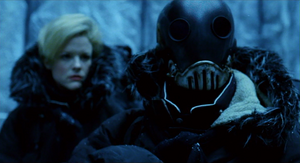 Kroenen watching as his master Grigori Yefimovich Rasputin is reborn. 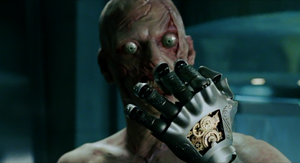 Kroenen without his mask. 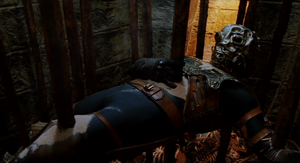 Kroenen impaled on a bed of spikes.