The Spy Who Loved Me

Annihilate the world by using hijacked British, American and Soviet submarines to fire nuclear missiles on New York and Moscow, and provoke the superpowers into a nuclear warfare.

Rebuild civilization under the sea once a nuclear war he instigated is over.
Claim Anya Amasova as his own.
Kill James Bond (all failed).

Karl Stromberg is the main antagonist in the 1977 James Bond film The Spy Who Loved Me. He is a wealthy entrepreneur and the founder and CEO of a shipping company called Stromberg Shipping Line who attempted to destroy human civilization as we know it and creating a new one beneath the sea.

He was portrayed by the late Curd Jürgens, who also played Sebastian in The Vault of Horror.

The webbed-fingered Karl Stromberg is a successful self-employed businessman as head of his own shipping firm, Stromberg Shipping, and chain of laboratories. The Stromberg Shipping Line is also one of the world's richest companies. His obsession and passion is the ocean, where he lives in his futuristic palace named Atlantis. Located off the coast of Sardinia, Italy, Atlantis has everything to support life above and below water for any length of time. Stromberg also owns a supertanker, Liparus (the second largest supertanker in the world, after the Karl Marx), that serves as his headquarters away from Atlantis. Aboard the tanker he has a small army of soldiers clad in orange jumpsuits. In Christopher Wood's novelization of the film, Stromberg is Swedish and his first name is Sigmund.

Although Stromberg has a passion and love for the ocean and its various species, he despises the human race, not unlike Jules Verne's Captain Nemo. Stromberg, however, is much more diabolical and has no interest in benefiting the world. He has a congenital condition in which his hands were webbed like those of aquatic birds or mammals. It is his personal mission to start over with a new civilization underwater. After contracting two scientists, Dr. Bechmann and Professor Markovitz, to create a state-of-the-art submarine tracking system, Stromberg uses this technology to capture the British HMS Ranger and the Soviet submarine Potemkin inside Liparus, along with their payload of atomic intercontinental ballistic missiles. His plan calls for the use of firing the nuclear weapons at Moscow and New York|New York City, thus framing each other's government and starting a nuclear war, which would wipe out virtually all of humanity, leaving Stromberg to rebuild civilization beneath the sea. However, the Russian and British government send the agents Anya Amasova and James Bond respectively to investigate the disappearances of the submarines.

While Bond and Amasova are briefed about their task, Stromberg meets with Dr. Bechmann and Professor Markovitz onboard Atlantis. He tells them that he has paid ten million dollars each into their bank accounts in Switzerland. Before dismissing the scientists, Stromberg tells them that he regrets to inform them that someone within the organization has been attempting to sell the scaled-down photographic reproductions of submarine tracking system schematics to competing world powers and that only someone close to the project could have done so. He tells his assistant to leave the room while he discusses the matter with Bechmann and Markovitz, but as she enters the elevator, Stromberg pushes a button and the bottom of the elevator opens, dropping the girl into a water tank occupied by a swimming shark. Over a PA system, Stromberg reveals that she was the one responsible for trying to sell the project as she had access to the information and watches with little to no emotion as the woman ends up being devoured by the shark. Bechmann and Markovitz then leave the room and Stromberg heaves Atlantis out of the ocean. He then calls two enforcers, Sandor and Jaws, and tasks the pair with the recovery of the tracking system, telling them to eliminate everyone who has come into contact with the system.

Stromberg then watches the helicopter containing Bechmann and Markovitz leaving Atlantis and, with them having outlived their usefulness, blows the helicopter up. He then swiftly cancels the transaction and tells another secretary to inform the two men's families that they have met with an accident and are "buried at sea".

Despite Sandor and Jaws' efforts, Bond and Amasova are able to recover a microchip leading them to Stromberg's marine research laboratory on Sardinia, resulting in Sandor's death. Their superiors decide that the two will be sent to investigate together. Under the cover of a marine biologist and his assistant/wife, Bond and Amasova are granted "an audience" with Stromberg. Sent by Stromberg, his helicopter pilot Naomi picks up the spies and brings them to Atlantis in a speedboat. When they arrive at the oceanic citadel, Stromberg watches them via hidden cameras. While Bond enters the elevator to meet the shipping magnate, Naomi volunteers to show Amasova around. Arriving in an office, Bond meets Stromberg in his false identity and the industrialist tests his cover by asking him about the fishes in his aquarium. Bond manages to avert this by correctly deducing a certain species of fish, much to Stromberg's surprise. 007 and him briefly talk about Stromberg's obsession with the ocean before the magnate parts with Bond, claiming to have urgent business.

While Bond and Amasova leave, Stromberg meets with Jaws, who confirms that his two guests were the ones he fought on the train. He then tells Jaws, Naomi and other henchmen to let them get to shore before killing them. However, Bond and Amasova manage to escape the hit thanks to a gadget-laden car, and Naomi ends up being killed when her helicopter is shot down by a missile from the car, though Jaws manages to escape alive one more time, despite his own car crashing into somebody's house.

When Stromberg's men capture an American submarine, USS Wayne, with the help from Liparus, Bond and Amasova are inside amidst the crew. As the submarine is placed inside Liparus, Karl talks to the captain via intercom, telling him that he and his crew will be exterminated via cyanide gas if they do not open the hatch. Without an alternative, the hatches are opened and the men leave the ship. Stromberg then orders the crew to be imprisoned with the crews of the other submarines. However, while the men are walking off, the villain recognizes Bond and Amasova and tells his men to bring the pair to him. When Bond and Amasova stand before him, Stromberg reveals his true plan: to fire nuclear missiles from the stolen submarines at Moscow and New York City, thus framing each other's government and triggering World War Three, which would lead to humanity utterly destroying itself and allow him to create a new civilization under the oceans. Stromberg also reveals that he considers the modern world to be corrupt and decadent, and that he plans to destroy it to make room for his new oceanic civilization. He remarks that the modern world will inevitably destroy itself anyway, and that his actions are merely "accelerating the process".

Ranger and Potemkin, now crewed by submariners loyal to Stromberg, then set off. After witnessing their departure, Stromberg orders his men to imprison Bond with the rest of the crew of the Wayne while he takes Amasova for himself and enters a speedboat with her to return to Atlantis. However, Bond manages to free himself on the way and frees the American, British, and Soviet crews from their cells. After arming themselves, Bond and the crews, united against a common foe, takes over the Liparus, killing most of Stromberg's henchmen. However, the captain and the remaining crew members seal the operations room with a strong armor proven to be nearly impenetrable, but Bond takes a detonator from a nuclear missile and implants it to a plastic explosive near the armor, destroying it and allowing 007 and his cohorts to break in and shoot down the captain and the remaining crew. Bond is later able to trick the stolen British and Soviet submarines to fire their nuclear warheads at each other with the same tracking system, obliterating both submarines and Stromberg's crews onboard and leaving the captain and others henchmen's deaths in vain. Using the USS Wayne, Bond and the remaining crew members escape as Liparus sinks to the bottom of the ocean.

Final confrontation with Bond and death at Atlantis

When Commander Carter gets orders from Washington to destroy Atlantis, Bond manages to convince him to wait for one hour to allow him to enter the aquatic fortress and save Amasova. After Bond arrives, Stromberg addresses the spy over the PA system and tells him that he will send the elevator down for him. Planning to drop his enemy into the shark tank, Stromberg is surprised to see that 007 has evaded his trap by keeping his feet off the floor. Arriving safely at Stromberg's living quarters, Bond sits down at the dining table, opposite Stromberg. The criminal then tries to shoot Bond with a hidden torpedo gun attached under the table, but Bond evades the missile and returns fire.

Bond coolly aims his gun underneath the table, then exercises his license to kill by shooting Stromberg two times in the crotch, once in the chest, and finally on the head, killing him. He then proceeds to rescue Amasova and they leave in an escape pod before Atlantis is torpedoed and sinks to the bottom of sea, giving the deceased Stromberg a burial at sea.

Stromberg's fascination with the sea was itself symbolic of this man - a smooth and unreliable vitality, whose black, smooth surface tried to hide emotional life underneath. Stromberg, a voluntary hermit, was frustrated by humanity's exploration of space, given that 70% of our planet had yet to be explored to the bottom of the seas. Here, it should also be noted that Stromberg related to the creatures of the sea more than just a love of nature. In genetic mutations, he had developed webbed hands. Since he was convinced that mankind would sooner or later destroy itself, Stromberg felt called to speed up the process by a nuclear war he intended to create. He was so set on his goals and beliefs that he was willing "to accept the judgement of posterity" for his attempted mass murder. His plan was to stand up like the sovereign of a submarine kingdom after the nuclear holocaust itself. Stromberg remarked to James Bond that he barely felt the need for contact with the outside world, as the microcosm of Atlantis provided everything for him that he needed to live: beauty, ugliness and death. Stromberg had little respect for human life and therefore no pity for those who had served him moments before. In spite of his advanced age, he could not resist the charms of a beautiful woman. This became clear when he captured Anya Amasova; he saved her life so that she could share his life in the future underwater kingdom, serving as his mistress. 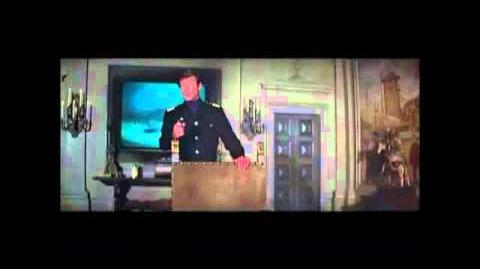