Start a Wiki
Karlee Perez is a professional wrestler and valet currently performing as a villainess in Lucha Underground under the name Catrina. She is, perhaps, best known for her time in World Wrestling Entertainment as the villainous Maxine.

Karlee's WWE career began in Florida Championship Wrestling as Liviana, though it was changed to Maxine after she participated in the third season of NXT. Maxine established herself as the standout heel of the competition, stating that the only place for her is "on top," and she was also shown antagonizing and bullying Hornswoggle. Maxine was the second Diva eliminated from the competition, which was won by Kaitlyn.

Maxine returned to the renamed NXT:  Redemption in August 2011, and continued her role as a villainess by engaging in feuds with AJ Lee and later Kaitlyn. In her return to NXT, the evil Maxine engaged in a relationship with Derrick Bateman, but it would end when Bateman developed feelings for Kaitlyn, as well as Maxine's past with Johnny Curtis being brought to light. After nearly a year on NXT:  Redemption, and two years overall in WWE, Maxine quit the promotion in June 2012.

Before beginning her stint in Lucha Underground, Karlee made an appearance for TNA on May 10, 2014, participating at the tapings of the second Knockouts Knockdown PPV, which aired on November 7. The event included a segment where Karlee interacted with Ethan Carter III, the former Derrick Bateman from NXT. Karlee later competed in a losing effort to Taryn Terrell.

Karlee joined Lucha Underground as Catrina, the evil valet to Mil Muertes. In her role, she would be at ringside during his matches, which he mostly won, and after his victories, Catrina would seductively lick the defeated opponent. She would appear to turn face and switch to managing Fenix, who defeated Muertes in a casket match, only to maintain her villainous persona and resurrect Muertes. Catrina not only resumed managing Muertes, but she would also managed the Disciples of Death (Barrio Negro, Trece, and El Sinestro de la Muerte), the latter winning the Lucha Underground Trios Championship from Angelico, Son of Havoc, and Ivelisse Velez at Ultima Lucha. Catrina managed Muertes to a Lucha Underground Championship win over Prince Puma as well.

As Maxine in WWE, Karlee is portrayed as opportunistic and arrogant, and is willing to use her feminine wiles to get what she wants. As Catrina in LU, Karlee is mostly a femme fatale. 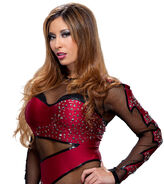 Add a photo to this gallery
Retrieved from "https://villains.fandom.com/wiki/Karlee_Perez?oldid=1988231"
Community content is available under CC-BY-SA unless otherwise noted.