Form a cult of undeath

Karthus, also known as the Deathsinger, is a villainous playable character in the multiplayer online battle arena game League of Legends. Once a Noxian gravedigger and corpse collector, Karthus became obsessed with the concept of death, willingly moving to the Shadow Isles to become an undead and form his own death cult.

The 23rd champion added to the game, Karthus was released on June 12, 2009, and received a full visual and lore update on June 4, 2014. He is most commonly played in the jungle, but can also be played in the mid or bot lanes.

While previously voiced by Adam Harrington, his current voice actor is unknown.

Born in a poverty-stricken village in Noxus, Karthus grew up without a mother, with his father having to raise Karthus and his three sisters alone. Growing up, Karthus' family had to survive on a diet of rats and rainwater, and as the best rat catcher it became Karthus' job to make sure his family was fed.

Because of disease and famine, death was extremely common in Karthus' village, and as time went on the young boy grew fascinated by people's cries at the loss of their loved ones. Hoping to study the nature of death, Karthus would sometimes sneak through the homes of people who were terminally ill, hoping to watch them die, but he could never get the timing right to actually witness the event firsthand.

When Karthus' sisters contracted the plague, Karthus' father was wracked with grief, but Karthus stayed by his sisters' sides, caring for them until one by one each of them died. Karthus should've felt grief as well, but instead he felt a sense of enlightenment as he wondered what the world beyond death could be like. As the tally-men collected the bodies, Karthus asked them questions about death, wondering specifically about the exact point between life and death, and if that moment could be frozen in time what wisdom it would unlock.

Impressed by the boy's curiosity, the tally-men inducted Karthus into their order as a gravedigger and pyre-builder, but his dedication led him quickly to rise to the rank of corpse collector, and the people of Noxus would take comfort in the songs he sang as he carried the bodies of the dead away on his cart. Eventually, Karthus worked as a hospice caregiver in the temple, tending to the terminally ill in their final moments. But after years of watching people die, Karthus decided he'd learned enough about death from mortals and sought to talk to the dead themselves at a cursed place called the Shadow Isles.

Journey to the Shadow Isles

Robbing the temple's coffers, Karthus left Noxus and bought a voyage to Bilgewater, a port city that had recently been attacked by a Black Mist during the Harrowing. Karthus requested passage to the Shadow Isles from ships all over the city, but everyone refused save for a drunk fisherman who was so debt-ridden he wasn't afraid of getting killed by the Black Mist. After they set sail, the fisherman's boat finally crash landed on the shores of the Shadow Isles, following a storm of sinister, foul magic. The fisherman wrestled his boat free from the rocks and prepared to retreat home, but Karthus made his way onto the shore, staff in hand, and beckoned the Black Mist to consume him whole.

The unholy magic of the isles twisted Karthus into an unrecognizable fiend, killing him instantly. But because he had accepted the mist willingly, Karthus' body was not destroyed, remaking him as an immortal undead being. Karthus' lifelong dream to die had finally been fulfilled, and he stood where he always wanted to be, at the brink right between life and death. Karthus turned around and approached the fisherman, who fell to his knees and begged for his life. Instead, Karthus killed him, transforming him into a wraith to add to his own personal legion.

Karthus did not care for the current state of the Shadow Isles, thinking the spirits that existed there were merely trapped in limbo and did not appreciate their deaths like they should. By spreading his message to the living and dead alike, Karthus would bring forth a glorious future where the entire world would be freed from mortality and be reborn in a beautiful state of undeath.

In game, Karthus is a battlemage-type champion, casting spells and utilizing sustained area damage to get in the middle of the fray and burn enemies down. His passive, Death Defied, lets him transform into a spirit for a few seconds after death before finally vaporizing. Karthus can use Lay Waste to blast locations on the ground for area damage, a Wall of Pain to slow and weaken enemies that walk through, and Defile to deal damage over time to enemies nearby him. Karthus' ultimate, Requiem, has Karthus deal damage to all enemy champions after channeling his power for 3 seconds.

As a young man living in Noxus, Karthus was shown to have an unhealthy obsession with death, handling dead bodies and watching people die to the point where it became creepy. In his delusions, however, Karthus doesn't see himself as a sinister figure and instead believes he is simply a guide who enlightens people to the true meaning of life: to die. Karthus has a distaste for the other villains in the Shadow Isles, growing angry at the deceptions of Elise and Hecarim while denouncing Thresh for imprisoning the dead. He also dislikes Mordekaiser, whom he views as nothing but a soul trapped within a hollow shell of armor. No matter what others may think of Karthus, he always remains steadfast in his belief that people can only be truly free in death. 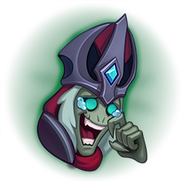 Karthus' "Go Get 'Em" emote.
Add a photo to this gallery

Retrieved from "https://villains.fandom.com/wiki/Karthus?oldid=4095272"
Community content is available under CC-BY-SA unless otherwise noted.