Abusing and torturing the Matoran workers in his realm.
Tormenting his victims with his Kanohi Olisi.

Obtain the Mask of Creation.

Take over the Matoran universe.
Seek revenge on Artahka (all failed).

Karzahni is the major antagonist in the BIONICLE series. He was a brother of Artakha and the ruler of the hellish land that shared its ruler's name. He also serves as the final antagonist in the Mahri Nui story arc. He was also an archenemy of Lesovikk, who he believed him to be responsible for his friends' disappearance.

He was voiced by Sean Schemmel, who also voiced as Icarax in the animated show and Makuta Teridax in BIONICLE: The Game.

Around 100,000 years ago, Karzahni was created alongside his brother, Artakha by the Great Beings. Soon after their creation, the two brothers fought for the possession of the Mask of Creation. After the few days of the battle, Karzahni was eventually  defeated by his brother who then claimed the Mask of Creation and he retreated into the island, which he created and named it after his name.

While Artakha chose to make a heavenly island for good Matoran workers, Karzahni chose to take in the bad ones, intending to repair their faults and return them to their homelands.

However, his ability to fix the Matoran was not up to par, and he completely rebuilt the Matoran, but into weaker and hideous forms. To compensate for his inability to properly repair the Matoran, he gave each of them weapons.

He then sent them to the Southern Continent to make sure his failures would not be discovered. The Turaga eventually noticed that Matoran sent to Karzahni never returned from their exile, and stopped sending their poor workers.

Angered by the lack of Matoran coming to him, Karzahni went into denial, blaming the Matoran for his failures. He refused to send any more Matoran away and trapped them within his realm, replacing their masks with his own twisted designs, stripping them of their identities. He also have no contact with the universe outside his realm for many thousands of years, leaving him ignorant of many developments in the universe such as the existence of the Makuta.

When Karzahni have learnt of the turn of events in the universe and schemed to take over the universe from Mata Nui, he began to organize the Matoran slave into his army and train them for the battle. He later left his realm and traveled to Mahri Nui as the water inside mutated him into his monstrous form.

He traveled across the ocean as he came across Lesovikk and Sarda. Eager to pit his skills against his enemies, Karzahni attacked them. At first, Karzahni was gaining an upper hand of beating Lesovikk, though the Toa of Air manages to overcome his attacks thanks to Sarda's encouragement before telling the ruler that his friends were sent to his realm long ago, and that he spent his time assaulting his realm trying to save them, failing everytime. Stunned by Lesovikk's determination, Karzahni attacked Sarda with his Olisis, horrifying the Matoran with the vision in which the Matoran of Mahri Nui perished in the sinking of the island. While Lesovikk was forced to abandoned the fight to help Sarda, Karzahni escapes.

A few hours later; while Karzahni wandered across the black water, he stumbled across the wounded Pridak who have been mutated by the mutagen. He offered the Barraki of the second chance of reclaiming the outside world in exchange of becoming his servant. Karzahni then possessed Pridak and took over the body, while mutating his features in the process. Karzahni then remained inside Pridak's body while the warlord led the Barraki.

When Pridak was defeated by the Toa Mahri in the Cord, Karzahni immediately forced himself out from Pridak. He then 'thanked' him for helping each other out and eventually told him that he have outlived his usefulness. The ruler then proceed to devour him alive before turning his attention towards the Toa. He then engaged the Toa in the fight; although the Toa manages to keep up the fight, Karzahni eventually overpowered them easily.

Karzahni was a completely insane, sociopathic and unpredictable ruler. At first, he could be friendly and kind at one moment but later revealed his malicious nature as he went in a murderous rage the next. He also ruled his realm through fear and psychological abuse, such as replacing the masks of his Matoran subjects to rob them of their identities and was also proved to be sinister and sadistic as he tormented his victims and enemies alike with nightmarish visions with his Kanohi Olisi.

Karzahni also had a deep hatred of Artakha due to his earlier defeat at his brother's hands and since extended his hatred to him and anything related to and made by Artakha. His past defeat was what prompted him of

Karzahni was also manipulative and cunning as he manages to trick Pridak into helping him to reclaim his empire in exchange of serving him. He was also willing to betray his pawn once his usefulness was outlived. 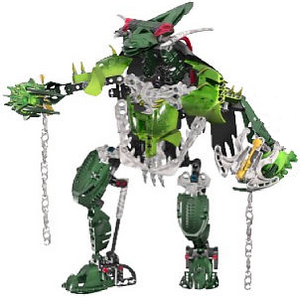 Karzahni in his set form. 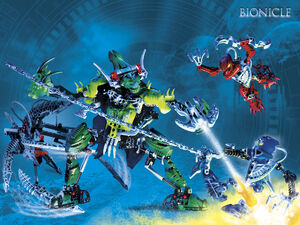