Servant Of the Devil Samiel

Get Max to sell his soul in exchange for magical bullets.

Extend his own contract for another three years.
Get his revenge on Agathe.

Kaspar is the main antagonist of Der Freischütz, the opera composed by the late Carl Maria von Weber. A fellow forester of Max, the protagonist, he is a undercover servant of the devil Samiel, to whom he has sold his soul. His attempt to extend his contract by victimizing Max is the driving force behind the whole play.

Max, the young forester favored by the head ranger Kuno and presumably his future successor and son-in-law, has not bagged a shot for months, and is greatly depressed because of it. When teased by Kilian, a peasant, he almost breaks into fight with the latter if not for Kuno's interference. Kaspar, accompanying Kuno, suggests that Max is under a hex before being berated by Kuno for his blasphemous words and his loafing attitude. Kuno then wishes Max good luck, but meanwhile warns him that should he miss the trial shot overseen by the Prince tomorrow, he would not marry his daughter, Agathe.

After the villagers have dispersed, Max, alone, sulks and laments for his bad luck and his terrible foreboding. Kaspar, feigning concern, approaches and offers Max a drink, singing some seedy songs to cheer him up, to which Max shows distaste and anger. Before Max leaves, Kaspar hands Max his rifle and instructs him to shoot an eagle faraway. To Max's surprise, the eagle is hit despite Max not aiming at all. Kaspar reveals to Max that he just fires a charmed bullet, demonic bullets that hit wherever the shooter wills them to. When Max eagerly asks Kaspar for more, Kaspar tells him to meet him at the Wolf's Glen at midnight, where he will produce more. After promising he won't tell anyone, Max departs.

When Max heads for Agathe's house, Kaspar arrives at the Wolf's Glen and summons his demonic master, Samiel, to negotiate a postponement of his contract. It is revealed that Kaspar has long forfeited his soul to Samiel and at dawn he must face damnation. However, Kaspar offers to help Samiel seize Max's soul if the devil give him another three years in return. Pondering, Samiel agrees and disappears, leaving Kaspar to prepare for the casting ritual.

Max arrives at the Glen as promised, and Kaspar instructs him to stay inside a drawn magic circle, and to repeat after him should he collapse, or the two are both doomed. Kaspar starts chanting and smelting ingredients in a crucible. As charmed bullets are created, unsettling phenomenons occur around them, including a wild boar, a carriage on fire barreling by, a host of hunter spirits galloping apace, and a earthquake shaking the whole valley. As the final bullet forms, Kaspar falls on his knees, invoking Samiel's name. Max, unknowingly, repeats after him and calls out for Samiel, thus sealing the contract. Samiel, appearing, answers to Max, causing him to fall into a deathly slumber.

The next morning, Max attends the trial shot ceremony in the presence of all of his fellow villagers, the Prince, and Agathe. However, prior to the event Kaspar has already had him use six bullets on trivial preys, leaving the seventh bullet - the cursed one which flies according to Samiel's will rather than the shooter's. Kaspar's plan is to make Max's bullet hit Agathe, killing the very reason he forfeits his soul and forcing him into committing suicide (making his soul Samiel's in no time). However, due to Agathe's rose wreath given to her by the hermit, a sign of purity, the demonic bullets ricochets harmlessly off Agathe and strikes Kaspar. Kaspar, in his final breath, sees Samiel (invisible to all but him) coming to drag his soul to Hell. He is eventually bitter and desperate when he dies screaming his defiance of heaven.

At first, Kaspar appears to be no more than a pesky and traitorous hedonist. He believes that the mortal world is filled with pain and peril, and one should enjoy alcohol, card games, gambling, and other worldly pleasures while one still can. However, deep down, he is an extremely ruthless, diabolical and manipulative individual who stops at nothing to save his own hide. In order to stave off eternal damnation for a few years, he resorts to exploiting Max's fears and insecurities, his love for Agathe and his bitterness of being mocked by fellow villagers, goading him into striking a bargain with the devil to ensure a quick pass for the trial shot ceremony.

He is also shown to be fairly superstitious and naive, being scolded by Kuno because of this. However, this may result from him being a real practitioner of dark magic. When facing Samiel, he shows a mix of caution, fear, and begging for mercy, although he never hesitates from calling upon the devil for help. 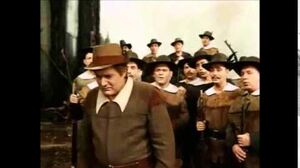 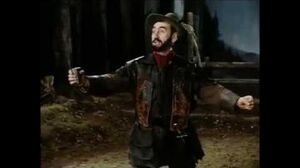 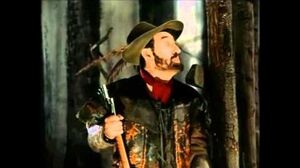 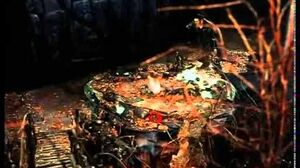 The "Wolf's Glen" scene featuring Samiel, Kaspar and Max
Add a photo to this gallery
Retrieved from "https://villains.fandom.com/wiki/Kaspar?oldid=3549390"
Community content is available under CC-BY-SA unless otherwise noted.