Villains Wiki
Register
Don't have an account?
Sign In
Advertisement
in: Mature, When They Cry Villains, Umineko Villains,
and 9 more

Head of the Sumadera family

Kasumi Sumadera is a villainess from Umineko no Naku Koro ni. She is the younger sister of Kyrie Ushiromiya and the head of the Sumadera family. While her sister was originally supposed to be the head of their family, Kyrie married with Rudolf, causing Kasumi to become the head of the family unexpectedly. Because of this, Kasumi bears extreme resentment towards Kyrie, to the point of loathing everything about her sister, including her niece, Ange Ushiromiya.

She was voiced by Sumi Shimamoto.

Alliance of the Golden Witch

Kasumi is first seen as the woman pursuing Ange. Ange notes that she only appeared after Eva Ushiromiya died and Ange inherited the "cursed gold". Tetsuro Okonogi, when ordered to stall Ange so that Kasumi could "take her to tea", allowed Ange to escape. Kasumi, upon learning this, pities the fact that Ange avoided her once again, and sent her men after Ange. When one of her men caught Ange, however, Juuza Amakusa appears and rescues her. Kasumi is then disappointed by the turn of events.

Kasumi reappears at the end of Alliance, awaiting Ange on Rokkenjima. She has Ange beaten by her henchmen as she told Ange why she pursued Ange. Kasumi was envious of how Kyrie had abandoned the family, and, instead of being punished, had the position of Family Head pushed onto her. She continued to remark how Kyrie could be happy, while she was suffering. When Ange questioned Kasumi's motives for beating her up, Kasumi replied that it was because Ange looked exactly like Kyrie.

Eva-Beatrice's spirit appears next to Kasumi, goading the latter into taunting Ange about Maria's diary. Taunting Ange to show her magic, Kasumi proceeds to rip up Maria's diary, angering Sakutaro and Mammon, who were watching.

Ordering one of her guards to shoot Ange, Kasumi was shocked when the man was instead impaled in the heart. Just before, Ange had summoned The Seven Stakes of Purgatory, that not only protected Ange from the bullet, but also killed the man. Although the Stakes appeared behind Ange, Kasumi and her henchmen could not see them because they had no love.

Ange warns Kasumi's men not to fire or else they would die, but they fire anyways, effectively getting killed by the Stakes. 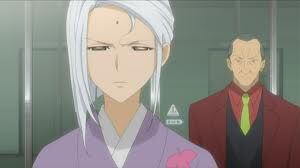