Provocates Gouldtar and challenge to a fight and kill him (failed)

Katar is the sacrier responsible for the death of Goultard's family. He was the main antagonists from Dofus OVA title, Goultard the Barbarian and in the service of Djaul who had inserted the demon Mongrelamus  into his body. His mission was to transfer this demon to Goultard to corrupt his mind and make him his servant.

Katar has not always been at the service of evil. He attacked the village built and managed by Hyrkul with the help of the descendant of one of the soldiers of the Order of the Vaillant Heart (a body responsible for protecting Bonta). This order was decimated by Hyrkul during the Aurora Purple attack which explains the spirit of vengeance that animated. Katar's warrior and keenness captivated the soul of the Black Dragon (The One Whose Name Was) that was in Hyrkul's body. In battle, he decides to abandon his host to take possession of Katar's body.

The demon Mongrelamus feeds on his host's anger (which is obviously suffering for the host). To succeed in transferring this demon to Goultard, Katar had to make Goultard mad with rage. He therefore kidnapped and killed the family of Goultard in cold blood. During his fight against Katar, poor Goultard will discover the lifeless bodies of his family. Sadness quickly gives way to a ferocious hatred that increases the violence of his blows tenfold. Katar is easily defeated and finds himself agonizing on the ground. It was at this point that Katar's demon came out of his body to take possession of Goultard's.

Once the transfer was made, Goultard became a bloodthirsty monster. Poor Katar, who was looking forward to being freed from the grip Medoroziam, did not take advantage of this freedom for a very long time, he will be finished by Goultard who will plant his head at the end of a spike.

Returning from the Grave

Katar's story does not stop there. While his soul was wandering in the limbo of hell, he was resurrected as a zombie by Brumaire who asked him to confront Goultard. Even if he finds himself in a putrefying body, Katar prefers to return among the living to continue wandering in hell, death having disappointed him, he accepts this new good luck.

Katar decides to track Goultard but when he finds him, the fight turns against him. Mongrelamus decides to intervene, he leaves the body of Katar with the intention to enter the body of Goultard to explode from within. By the time Mongrelamus leaves Katar's body, he gets caught in mid-flight by Bilby (Goultard's pet) who devours him. Although the loss of Mongrelamus weakened Katar the latter did not give up to attack it.

As Katar is a zombie, even separated from his body, his head still lives. Goultard picks it up and hangs it on his belt as a trophy to force him to follow him on their adventures. Goultard believes that this humiliation inflicted on Katar is much worse than death and indeed, Katar will not be able to bear this period of his life as a dead man.

Destiny will finally be favorable to Katar. Following an avalanche that took away Goultard, Katar's head detached from the belt of his carrier. Katar would have been buried under the snow if Bilby had not dug it up. Despite the lack of

affection that Bilby has for Katar, out of compassion, she will drag this head in search of Goultard. Seeing that he intends to conquer the world, Katar offers his services as a guide and adviser to Cornu Mollu. The god is amused that a head incapable of moving by itself has the pretension of being able to help it. Katar argues that he knows the geopolitics of the World of Twelve well and that his information can help him save time. Cornu Mollu is seduced by the sense of flattery of Katar, he agrees to take him to his service and gives him a new body more powerful than the old.

Goultard being on the ground, Katar could have easily finished him, however he wants to face him again, so he leaves him alive. Before leaving, he flies Bilby to Goultard who is too hurt to stop him. Katar does not do this to annoy Goultard, but because he has affection for this pet. By spending time with Bilby when she dragged her head in the snow, he ended up attaching herself to her. Of course Bilby wanted to stay with Goultard, but she did not have a choice. She will return with her master only from Volume 22, when Katar accidentally drops the hang glider that he was flying. As he was tracking Goultard, Bilby will land directly on his former master to the delight of both.

Katar taunting Goultard seeing his family killed after the kidnapping.

Katar releasing his sword from the marks with blood on his body.

Katar sore from the brutal beating of his adversary.

Mongrelamus emerging from of Katar's body upon discovering that its contestant is much stronger than its current host.

Katar last moments before knowing its end at the hands of Goultard at the mercy of Mongelamus. 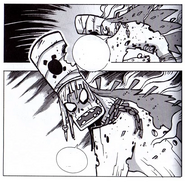 Katar returning from death and seeking rematch against Goultard in his zombie appearance.