Become a better assassin for Noxus

Born and trained in the powerful Du Couteau house, Katarina is one of the most lethal assassins in all of Noxus. Renowned for her precision, dexterity, and ambition, Katarina hopes to be the sinister blade she was always meant to be and put her skills to good use for the Noxian High Command.

The 36th champion added to the game, Katarina was released on September 9, 2009, and is most commonly played in the mid lane.

She is voiced by Tara Platt, who also voiced Caster in Fate/stay night, Yuriko Watanabe in Marvel's Spider Man, the Edelgard in Fire Emblem: Three Houses, Dreamcatcher in Skylanders: Trap Team, and Anna Williams in Tekken 6.

Katarina was born the eldest daughter of General Du Couteau, and while her sister Cassiopeia often won the attention of her mother, Katarina was raised under the tutelage and guidance of her father to become one of the most precise assassins in all of Noxus. General Du Couteau was a strict teacher who was difficult to impress, and after years of training Katarina hoped to win her father's approval and the approval of the empire by performing exceedingly complex missions, even testing different poisons on herself to test her own resistance to them.

One day, Katarina was tasked with assassinating an enemy line officer known as Demetrius, but seeing the task as a waste of her talents, Katarina disobeyed orders and instead assassinated the enemy commander. However, this proved to be a terrible error of judgment, as Demetrius took charge of the enemy forces and killed dozens of Noxian soldiers, nearly costing the General his life.

Furious with his daughter's disobedience, the General sent one of his top proteges to execute her, the assassin known as Talon. Their battle was brief and Katarina left the encounter with her life intact, but with a new scar over her left eye. Six hours later, Katarina killed Demetrius as a recognition of her own failure, with her scar as a permanent reminder of it.

Humbled by the consequences, Katarina has lost her father's favor, but hopes to someday redeem herself in both his eyes and the empire by putting her talents to good use.

In game, Katarina is an assassin-type character, using high mobility and damage output to dart past enemy lines. Her passive, Voracity, reduces the cooldown of her abilities when enemies she damages die. Katarina can use Bouncing Blade to throw ricocheting daggers at enemies, Preparation to gain movement speed, and Shunpo to dash to targets. Katarina can also use her ultimate, Death Lotus, to throw a flurry of blades around her in a circular motion.

Katarina is often portrayed to be a hotheaded and arrogant individual with a love for wanton violence and a generally aggressive approach when facing her enemies. When her father tasked her with assassinating Demetrius, Katarina disobeyed his orders and decided to kill a higher value target in hopes of impressing him, showcasing a reckless side that was more concerned with her own vanity instead of fulfilling her duty to the empire. Katarina is very ambitious, hoping to win her father's approval so that she could be seated at his right hand, but after disappointing him for the last time, she is smart enough to rededicate her skills to the empire as a whole instead. More recently, Katarina has even embraced these new circumstances, ignoring many of the methods imposed by her father under his tutelage and instead serving Noxus how she sees fit, showcasing her rebellious side once again. 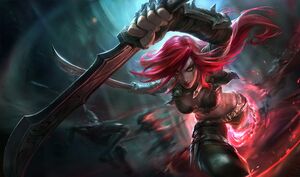 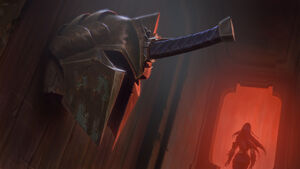 Katarina in "Message on a Blade's Edge". 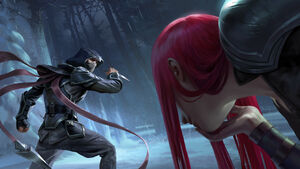 Katarina and Talon in "The Name of the Blade". 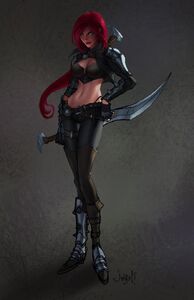 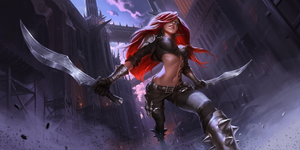 Katarina as she appears in Legends of Runeterra. 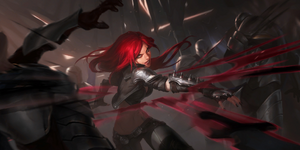 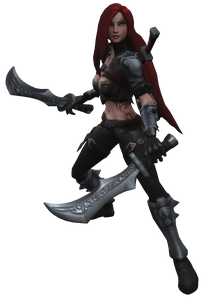 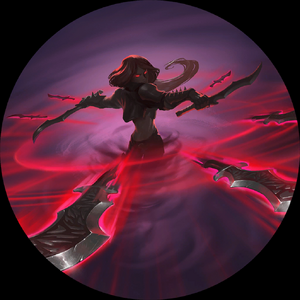 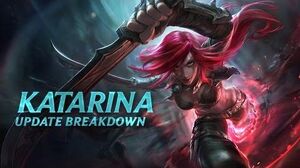 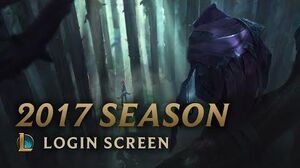