Scott Pilgrim vs. the World

Playing at concerts (in the movie).

Sending in robots after Scott.

Kyle and Ken Katayanagi (also known as the The Katayanagi Twins) are major antagonists in the graphic novel series Scott Pilgrim and its movie adaptation/game Scott Pilgrim vs. the World. They are twin brothers of Japanese descent and Ramona Flowers's fifth (Kyle) and sixth (Ken) ex-boyfriends, who are also members of the League of Evil Exes.

They were portrayed by Shota Saito and Keita Saito in the movie adaptation.

Not much of the twins' past are known, but it is stated that they were the ones to dump Ramona due to her cheating on them with each other. They share an almost symbiotic relation, constantly completing each other's phrases. They begin sending robot after robot to chase and destroy the titular character Scott Pilgrim, but they are all defeated, Scott complaining about the lack of reward with their defeats. He also learns that they are dating his friend Julie Powers while defeating their third robot. He finally engages the twins face-to-face while his ex-girlfriend and Sex Bob-omb drummer Kim Pines is held hostage in a cage. He tries hard to defeat them, but their powerful tag-team moves are too much. Kim decides to lie to Scott by telling him that Ramona is waiting for him, giving him the courage to fight them and defeat the twins, which earns him an achievement.

In the movie, the twins' role is slightly reduced. After Ramona storms out of the night club where Roxanne Richter was defeated and leaves behind a list of her exes, Scott learns that the twins are the next opponents of the Sex Bob-omb, but learns only ten minutes before the show that it is an amp battle, and is shocked to see a whole wall of amplifiers in their front. They attempt to defeat the twins in a music battle, but are literally thrown against a wall when the twins use their music to summon two giant snow dragons. Scott then sights Ramona amongst the crowd with G-Man Graves, revealed to be her final ex Gideon Gordon Graves, who is leading the twins against the Sex Bob-omb. The band rises up and fights back by summoning a giant Yeti to fight the dragons, and end up victorious when the dragons fall over the twins, crushing them and earning Scott 5000 to 6000 points and an extra life.

In all adaptions, after being defeated, the twins respawn back at their home, having learned their lesson.

In the game, Ken (called "Kevin" in this appearance) and Kyle (now brown-haired) are dual bosses from World 5. They are fought twice in the game. The first time is at the top of a building, where the twins use a colossal robot to fight Scott. In the second time, the twins fight Scott themselves, where they use some standard melee attacks combined with deadly co-op attacks (the most dangerous being their trademark Double Hurricane Kick). The battle can be hard, as the player must knock both out to win. But once again, their attacks are useless, and Scott ends up victorious as they dissolve into small dragons that fly away, "Kevin" leaving $17.95 and Kyle leaving $14.95 in coins, plus a small $2.00 bonus.

In the books and in the game, the twins are tactical and almost symbiotic, often finishing each other's sentences and walking together. But in the movie, the twins are quiet and cunning, focused on fighting through music and gaining the battle of the bands, also seeking to destroy Scott by Gideon's orders, which does not give them enough time to speak (also, their actors do not speak English and their dialogue had to be cut to spare time).

Their powers are not too vast in the books and in the game, as they only rely in robotic skills to fight.

But in the movie, the twins can use their music to summon giant dragons to fight for them, as well as to create massive shockwaves to send their opponents flying.

But in Combat, The Twins are a skilled Tag-Team of Martial Artists and make use of a number of techniques utilized through a “Twin Link”. They can use effective moves such as the “Double Hurricane Kick” and “Simul-Punch”, which their moveset is a reference to Double Dragon and Street Fighter. 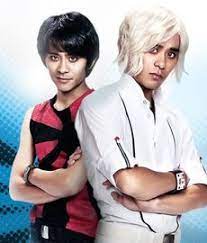 The Twins in the movie.

The Twins in the video game.