Kate Devore is a villainess from Alfred Hitchcock Presents. She appeared in "The Opportunity", from the show's seventh and final season.

She was portrayed by the late Rebecca Sand.

Kate is the evil wife of Paul Devore, and the couple is in an unhappy marriage. Despite this, Kate refuses to grant Paul a divorce, as she is unwilling to hand half of her fortune to him.

By the end of the episode, Kate walks into the home to find Paul tied up and the house burglarized, with Kate's safe robbed (by Paul, who set up the scenario). Kate considered Paul lucky that the burglars didn't kill him. Instead of freeing Paul from his "capture," however, the villainous Kate took the opportunity to kill Paul, doing so by smothering him with a pillow. It was revealed in Hitchcock's closing narrative that Kate was arrested for Paul's murder. 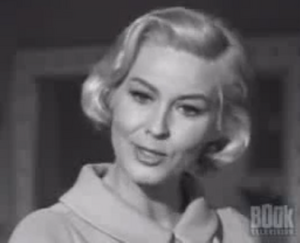