Villains Wiki
Register
Don't have an account?
Sign In
Advertisement
in: Gundam Villains, Anime Villains, In Love,
and 46 more

Traitor
Katejina Loos is a major antagonist in Mobile Suit Victory Gundam. Starting off as a pilot of the League Militaire, Katejina later changes sides and joins the Zanscare Empire after becoming infatuated with their ace pilot, Cronicle Asher.

She was voiced by Kumiko Watanabe in the Japanese version, and Nicole Oliver in the English version of some games.

Katejina later trains as a soldier, eventually becoming another ace pilot for Zanscare alongside Cronicle. Developing a support for Maria's matriarchal ideals, combined with her attraction to Cronicle, Katejina became a fierce supporter of the Zanscare Empire.

Over the course of Victory, Katejina would clash with Uso on several occasions. She also manages to kill some members of the Shrike Team, as well as Uso's best friend Odelo Henrik. Eventually, Katejina begins to show awakened Newtype abilities, granting her an enhanced sight and voice projection.

After Uso kills Cronicle during the Battle of Angel Halo, Katejina attempts to avenge him, only for Uso to defeat her as well and to wind up losing her memory and eyesight. Now in a more humbled state, Katejina becomes much kinder and returns to Earth to live out the of her days in peace. 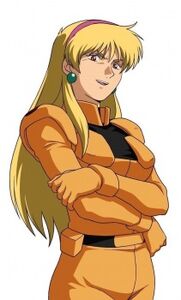 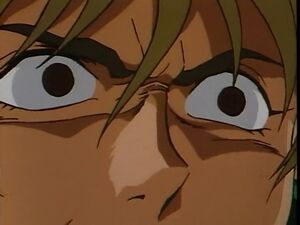