Kathool Atchoo is a minor antagonist in MechQuest, the main antagonist of the Water Orb saga and the Ninth Chaos Beasts.

Kathool Atchoo made its first appearance MechQuest as a the guardian of the underwater ruins.

Kathool Atchoo's role is expanded in DragonFable where it acts as the main antagonist of the Water Orb Saga and is responsible for the sudden disappearance of the Water Elves. He calls the Water Orb the Dragonheart Shard for an unknown reason.

Kathool rested at the bottom of the sea areas of The Span, awakening upon the defeat of the three Proto-Chaos Beasts Carnax, Fluffy the Dracolich & the Dragonoid. The beast was later defeated by the players, exchanging some words to them remarking that they would later meet again. After Iadoa's defeat, a vision of Kathool appears to voice some final words. 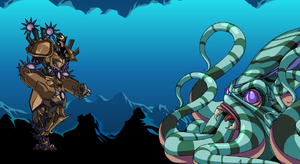