Katrina Spellman, also known as Nasty Girl, is a recurring villainess from Sabrina, the Teenage Witch. She is the evil twin of Sabrina Spellman and lived in South Dakota before meeting Sabrina and showing her true evil colors.

She was portrayed by Melissa Joan Hart, who voiced the Dee Dee Twins in Batman Beyond.

Katrina first appeared in the Season Three finale, "The Good, the Bad, and the Luau," after Sabrina figured out the family secret: that every Spellman has a twin. At first, Sabrina enjoyed having a twin and loved spending time with Katrina, but later on, her aunts informed her that Katrina could be her evil twin, revealing that in every set of Spellman twins, there is always a good one and an evil one. A tribunal is held between Sabrina and Katrina to find out which twin is the evil one, and it ends with Sabrina failing the test and being labeled as the evil twin.

As also revealed, the evil twin has to be shoved into a volcano, as lava is the only substance that can actually destroy a witch. At the ritual, Katrina shoves Sabrina in without hesitation, and it was this action that revealed Katrina as the true evil twin, as no good twin would ever shove the evil twin down a volcano so hastily. Sabrina was later pulled out of the volcano, and Katrina was placed in a witch prison.

Katrina returned in Season Five's "You Can't Twin," doing community service at an Other Realm carnival as she encounters Sabrina. Now fully turned heel, the evil Katrina switches passports with Sabrina, and cackles evilly over her wicked deed. As Sabrina takes Katrina place in prison, Katrina causes trouble in the mortal world; hampering Miles' experiment and dating Morgan's boyfriend and making out with him. In the episode's end, Katrina is confronted by Sabrina, who gets her passport back, and is sent back to her cell.

Katrina's last appearance of the series came in Season Six's "Deliver Us From E-Mail," where she, posing as a blogger named "Nasty Girl," posts nasty blogs online. After reading Sabrina's article blasting her blogs, Katrina sends her a computer virus that turned Sabrina into a mindless airhead. Knowing that Sabrina's change in personality is Katrina's evil handiwork, Zelda confronted Katrina in her cell and demanded the antidote for the virus, with Katrina stating that there is no antidote. However, Jezebelda (Zelda's evil twin) and Katrina's cellmate, sells out Katrina and states that Sabrina will be cured if she learns life's lessons, thwarting another one of Katrina's evil plans. 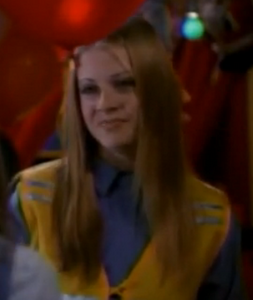