Villains Wiki
Register
Don't have an account?
Sign In
Advertisement
in: Marvel Villains, Destroyer of Innocence, Bond Destroyers,
and 27 more

Brainwash Melinda May and make her as her new "mother" (failed).

Katya Belyakov is a posthumous antagonist in the TV series Marvel's Agents of S.H.I.E.L.D., appearing as the main antagonist in the flashback scenes of the Season 2 episode "Melinda", and a Framework version of herself appears as a minor yet pivotal antagonist in Season 4.

She was a 12-year-old Inhuman who could control and feed off of people's emotions, which also drove her insane and whose actions indirectly drew S.H.I.E.L.D.'s attention. She is best known for being reluctantly killed by Agent Melinda May, which had scarred May's life forever.

She was portrayed by Ava Acres.

Katya was given her powers by her mother Eva who stole the Terrigen crystals from the Afterlife compound in order to give her the power that she felt her daughter deserved.

Unfortunately, the Terrigen Mist gave her an exceptional amount of power, with the ability to control the minds, senses, and bodies of anybody she came into contact with. She used this power to control both her mother (who appeared to share her abilities to a lesser degree) and a large group of street thugs in the city of Bahrain. She intentionally caused a large amount of physical and emotional pain in her victims while controlling them, and caused them to inflict this pain onto others, as this pain allowed her to grow in strength.

When this drew the attention of S.H.I.E.L.D., the group believed that her mother was behind it, and were unaware of Katya's existence. Eva seemingly sent numerous thugs after the S.H.I.E.L.D. agents, who "kidnapped" Katya as a ruse to have the agents follow them all into the abandoned building, where Katya quickly enslaved all of them to her will.

Without any other option, agent Melinda May entered the compound and was forced to battle all of Katya's drones without killing them (as she knew that they were under "Eva's" control, and many were S.H.I.E.L.D. agents), and eventually killed Eva by shooting her several times (though not before being shot in the leg by Eva herself).

After Eva's death, May realises that all of the thugs and agents are still organised and coming towards her, and asks why, at which point Katya reveals herself as the true controller, and walks slowly towards Melinda, with an expression that kept shifting between one of anguish and one of pleasure, with her arm stretched out towards Melinda, feeding off of her pain.

As she does this, she begins needlessly killing her own drones out of pure enjoyment, telling Melinda "I want your pain. Give me your pain. I need your pain.", and at one stage mimicking her feigned fear and sorrow during her "kidnapping" to demonstrate to May how easily she fooled them all. After telling Melinda that she (Katya) needs a "new mother", realising that she doesn't have a choice, in order to save as many of Katya's drones as possible as well as her own life, Melinda shoots Katya dead. The incident had a lasting effect on Melinda May's personality, as she constantly regretted having killed a child.

In the digital reality called the Framework, the timeline was altered and it result with Melinda instead saving Katya during the Bahrain incident. However, three days after being relocated to Cambridge under a S.H.I.E..L.D. protection program, Katya used her powers to murder 279 innocent people (mostly children and anyone who had attempted to get close to her during her relocation) at the school, prompting S.H.I.E.L.D. to be shut down. While it is unknown what had happened to Katya during or after the incident, it allowed HYDRA to use this fear and hatred swelling up in the population to unite humans against the Inhumans, therefore creating a fascist dictatorship across the entire world. 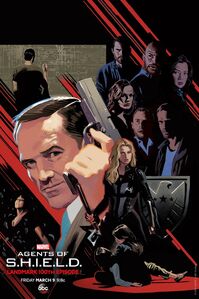 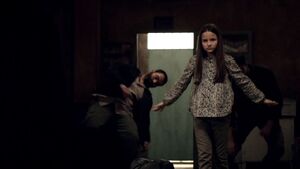 Katya using her powers to enslave and kill her drones. 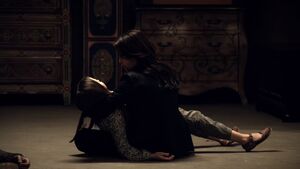 May holding Katya's body after being forced to kill her. 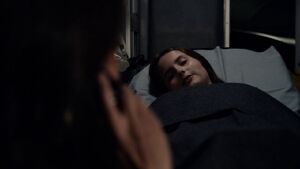 Katya in the Framework, having survived the incident in Bahrain. 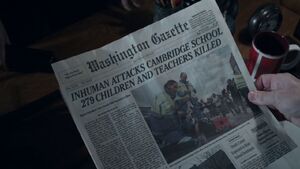 Newspaper article of the Cambridge incident which Katya caused (in the Framework).