Leader of the wildebeests (formerly)

Ascend to the top of the food chain.

Kill Samson, Ryan and their friends (both failed).

Kazar is the main antagonist of Disney's 2006 film The Wild. He is an argumentative and merciless wildebeest who tries to ascend to the top of the food chain. He is also the former leader of Blag and the other wildebeests as well as the arch-nemesis of Samson and Ryan.

He was voiced by William Shatner, who also played Mayor Phlegmming in Osmosis Jones, and General Shanker in Escape From Planet Earth.

Kazar is a skinny black wildebeest with two sharp horns and a blinded left eye.

Kazar is a very cruel, wicked, deceitful, opprobrious, uncompromising, manipulative and traitorous wildebeest who no longer wants to dwell at the bottom of the food chain. He is somewhat insane and preposterous since he actually wants to eat meat in order to ascend to the top of the food chain. He is also shown to be extremely abusive towards his herd, especially his second-in-command Blag.

Kazar captures Nigel the Koala and reveals to him that a stuffed koala bear came out of the sky (actually from a plane) and scared away a pack of lionesses who cornered him. Kazar therefore wants prey to become predators and vice versa before dubs Nigel as "The Great Him". When he hears that there are two lions nearby, he orders his lieutenant Blag to bring them, so they can eat them.

Kazar attempts to kill Samson and Ryan when they enter the treacherous volcano. After an intense battle, Kazar orders Blag and the others to kill Samson and Ryan. However, Blag and the rest of the wildebeests (who do not really want to turn predators into prey) turn against Kazar and refuse to help him. Enraged, Kazar tries to kill Samson and Ryan himself, but Samson unleashes a powerful roar, which causes the walls of the volcano to crumble down. Kazar is then abandoned by his own minions and left to die in the volcano before he is crushed to death by a falling boulder after catching his front hooves on the plush koala's pull string, while the rest of the animals escape to safety before the destructive volcano explodes. 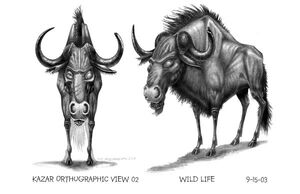 Kazar's death.
Add a photo to this gallery