Dominating the world.
Having revenge.

Unleash his demons army from the underworld by using the Hero's Chi (succeeded).

Kill anyone in his way and to conquer China and the world and wipe out all mortals (failed).

Ke-Pa is an antagonist from the TV series Kung Fu Panda: Legends Of Awesomeness, who serves as the main antagonist of the two-part episode "Enter The Dragon". He is a demonic dragon who (a long time ago) ravaged the Valley of Peace with his fellow demons.

He was voiced by Alfred Molina, who is best known for portraying many characters, such as Maxim Horvath in Disney's The Sorcerer's Apprentice, Viggo Grimborn in Dragons: Race to the Edge, and Doctor Octopus in Spider-Man 2.

Ke-Pa was shown to be blasphemous, arrogant and bitter of his defeat against Oogway in both forms; however, he additionally became destructive and tyrannical when he regained his demonic powers. His plans to wreak havoc and destroy the world shows that he is a vengeful, oppressive, manipulative and power-hungry being. He is also shown to be very disrespectful and vituperative for mortals and will mock and toy with them, believing them to be powerless against his supernatural powers.

When Oogway defeated his demon army and sent them into the underworld, sealing the pathway back using his "Hero's Chi", Ke-Pa nearly killed him in hateful vengeance, until the power of the Sacred Peach Tree stopped Ke-Pa, rendering him into the body a powerless pig. Swearing vengeance, he fled.

Ke-Pa then waited for the tree to die so that he can regain his powers, destroy the one who possesed the "Hero's Chi" and free his demons. When the day came that the tree started to die, Ke-Pa started to gain some of his powers back and headed for the Valley of Peace. There, he encountered Po, who he fought and easily defeated. After that, he arrived at Peach Tree Hill, where he fought Shifu and defeated him. After that, the tree died and Ke-Pa gained his full power and true form back. When Shifu lies saying that he has the "Hero's Chi", Ke-Pa attempts to free his demons by crushing Shifu thus destroying the Chi.

However, Ke-Pa discovers that Po is the real host of the Chi and almosts crushes him to death, extracting the Chi and freeing his demons in the process. However, Po is brought back to life by the peach tree sapling planted by Shifu and his Hero's Chi is restored to him. Using the chi, Po reseals the demons then battles and destroys Ke-Pa, ending his reign of terror for good.

In his mortal form, Ke-Pa is a gray pig with large ears, white bushy eyebrows, and jagged teeth. He sports an orange robe with yellow stripes and a small orange and yellow hat.

Ke-Pa is easily the most powerful fighter in the show, with the possible exception of Po when powered by the Hero's Chi. He possesses great strength, dragon-like fangs and claws, and the ability to fly and breathe fire. He also has telekinetic powers in both his mortal and demon form, which he used to crush his foes and fling them around in a sadistic and dangerous manner. He also possessed the ability to manipulate lightning. 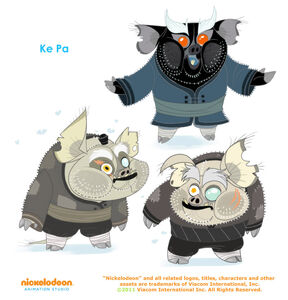 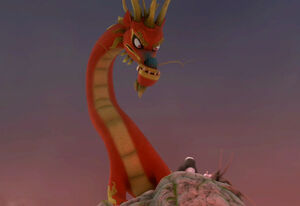 Ke-Pa's moments after his transformation. 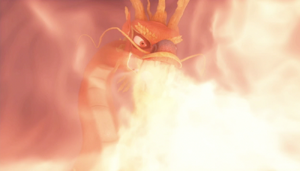 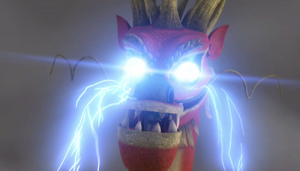 Ke-Pa using one of his many powers. 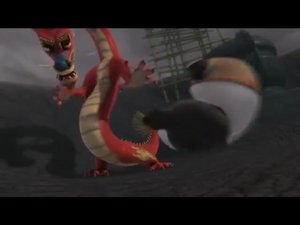 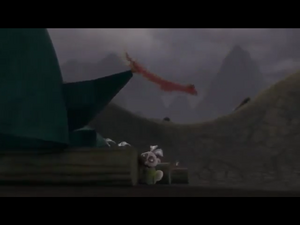 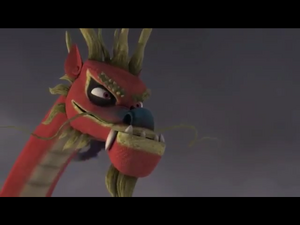 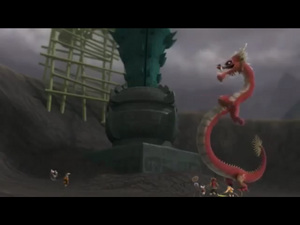 Ke-Pa's evil laugh after he finally got the hero's Chi that is Po. 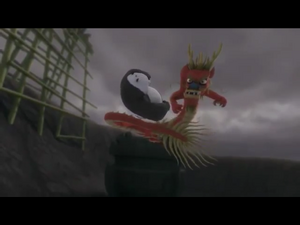 Ke-Pa's breakdown after Po restrained his dragon demon armies in the underground dome. 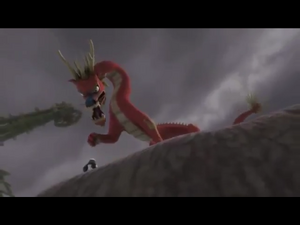 Ke-Pa's death stare.
Add a photo to this gallery

Retrieved from "https://villains.fandom.com/wiki/Ke-Pa?oldid=3465763"
Community content is available under CC-BY-SA unless otherwise noted.