Kedamas, also in plural as Kedama, are a race of youkai resembling white balls of fur from the Touhou Project series that appear in EoSD and PCB Stage 4. They appear in a number of fangames, being the most common enemy in Moedan and Tasofro's platformers, such as MegaMari and Super Marisa Land and also populating the first floor of the dungeon crawler Labyrinth of Touhou. They also appear as the only enemy type in Sanae Challenge! FUSION. Fan art often frequently depicts them with °д° faces drawn on them and associates them with Lily White.

They have been described as "hairballs" (毛玉, kedama), which is from the fact that they resemble white balls of fur. Shown in the sprites of the Touhou Project games, they are simply white fluffy hairballs. 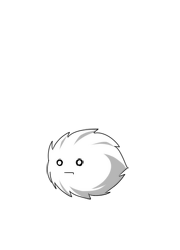 Touhoumon/Touhou Puppet Play
Add a photo to this gallery

Retrieved from "https://villains.fandom.com/wiki/Kedama?oldid=3079756"
Community content is available under CC-BY-SA unless otherwise noted.