Kee-Oth is a demon whose blood was used in the creation of the Demon Sword by Jake's father, Joshua.

He was voiced by Noah Nelson.

Kee-Oth is muscular with dark red skin. His head is as wide as his body, with glowing green eyes, sharp fangs, a pair of curved horns, and oddly shaped ears. His wings are tattered, but he still flies unhindered. His long tail is nearly as long as his body and tapers to a point.

He appears in the first message left by Joshua for Finn and Jake, where he was defeated with the spell "Kee Oth Rama Pancake." He physically appears at the end of "Dad's Dungeon", yet again demanding his blood back, but was repelled by Jake with the same spell.

Kee-Oth returned in "Play Date" where Ice King and Abracadaniel brought him back by reading an inscription on the Blood Sword. He grabbed them both and threatened to kill them if Finn didn't return his blood. Finn broke the Blood Sword in half and released Kee-Oth's blood back to him, causing him to grow greatly in size and power. He then grabbed Jake, thinking he was Joshua, and teleported away.

After he took Jake hostage, Kee-Oth drained him of his blood and imprisoned him in a hole. Very soon, he questioned him on why he isn't trying to attack him while still thinking him to be Joshua. Jake then informs Kee-Oth that he is not Joshua but his son, as the demon realizes his mistake and inquires about Joshua until he learns that he is dead. Kee-Oth then tried to goad Jake into fighting him but the latter refuses since he sees the demon wants to be beaten up. 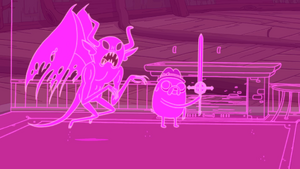 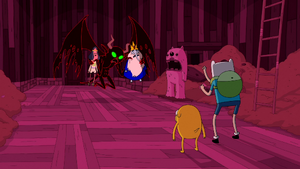 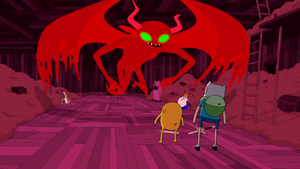 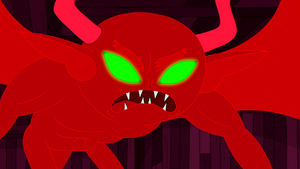 Retrieved from "https://villains.fandom.com/wiki/Kee-Oth?oldid=3465764"
Community content is available under CC-BY-SA unless otherwise noted.