Are You Afraid of The Dark

To create a galaxy-class zoo filled with human children

Not much is known about him but what is known that the man by the alias The Keeper was the administrator of an intergalactic zoo. He desired to have human children on display in his "habitats", which he designed to mimic their natural settings. The Keeper only wanted human children who were normative in terms of psychological and physiological development. If he encountered anything deviating from the norm in his zoo, the subject would be eliminated. He captured children from all around the world; in his eyes he was showing the "biodiversity" of his specimens.

He was portrayed by Peter Messaline, a veteran Canadian actor.

The Keeper was very eccentric and insane, spoke with a affected tone, and had an inexplicably British-sounding accent. It is implied that he might have been a space and time traveler as well. His appearance was frighteningly sordid, he had poor oral hygiene, he looked unwashed, and his clothes matted and dirty, perhaps a consequence of being so obsessed with his goal. He also wore gold nail polish.

The Keeper was quick to abuse his henchmen in an effort to demonstrate to his specimens the consequences if they attempted to escape from his zoo. He employed an alarm system designed to give off an extremely high pitched sound, a sound so powerful that a person would be paralyzed and in agony within seconds, and insane within several minutes from the overstimulating noise.

To collect his specimens, he would send his henchmen to capture children using a stun-gun that emitted a high-pitched noise that would overstimulate the subject into submitting to the will of the captors. He would sometimes use it to supress them, in an effort to maintain order and control over his specimens if they talked during their feeding time. He feared an uprising would happen.

The Tale of The Closet Keepers

The Keeper was already active in finding human children for about a week when he decided to send his henchmen to a very urban part of Cleveland to capture some American children.

Two of these, Billy and Stacey, were rivals at basketball. When his schoolmates agreed to include Stacey, Billy mistreated Stacey because she was deaf. Stacey would not stand for his bullying and ran off to an abandoned, derelict flat. His peers, disgusted with his behavior, decided to leave him at the basketball court. He decided to continue practicing his skills, while Stacey looked around the abandoned flat. She noticed two strange men in suits coming down from the upstairs. They discussed their plans to capture normative human children. She hid away in a corner. Curious to see where they came from, she went up the stairs, and noticed a strange green glow from the closet in the master bedroom. She stepped in and soon found herself in a chamber which served as an (interdimensional) teletransporter.

She looked around and was soon captured by two of The Keepers henchmen, who were en route to England. They then placed her in a 'habitat'. Terrified upon seeing some aliens gawk and take pictures of her in her habitat, she was greeted by The Keeper. He informed her that she was one of several specimens he had collected in an effort to realize his grand vision of an intergalactic zoo. He came to the conclusion that she was not very bright after she had failed to understand him, he did not realize that she was deaf. He warned her of his nefarious alarm system, dragging his closest guard by the ear to demonstrate it. The Keeper then left her in there, telling her to make herself comfortable and that she was going to remain there for "quite some time".

Soon after, however, The Keeper came to the conclusion that Stacey would need to be eliminated, on account that "something was odd about her". He briefed his closest guard on this and told him to make sure that the other human children do not find out about his plan, fearing an uprising. It would soon come, however.

Meanwhile, his other henchmen have gone out into urban Cleveland and captured Billy from the basketball court. Knowing nothing about human behavior, the dimwitted henchmen resort to using the stun-gun.

Billy is led into the same habitat as Stacey. Using sign language, he tells her that they are in a zoo. Feeding time comes, and the henchmen come to distribute a green Jello-like substance to the children as food. Billy talks to an English girl, who tells him "We call this the future, The Keeper calls this the past." She is delighted to find out that Stacey is deaf and hopes that they can plan to escape, as Stacey's disability becomes an advantage; The Keeper keeps his specimens under control with sound.

This brief moment of hope is suddenly interrupted when The Keeper decides to walk in with a stun gun and silences one of the children, from Denmark. He reminds the children that they are to be seen and not heard. Discovering that Billy has refused to eat his ration, he tauntingly tells him that he will be hungry later. Feeding time concludes, and order the children to return to their habitats. He summons his guard, and tells him after he has finished cleaning up, to collect Stacey. Reading The Keeper's lips, she discovers his plan to eliminate her.

Stacey retreats to the habitat in silent terror, and tells Billy about the Keepers plan. They decide to escape. Using a mirror that The Keeper installed in the habitat, they manage to deflect the light and avoid tripping the alarm system. Stacey gets out and eliminates two of the henchmen with the alarm that she cannot hear. She turns the alarm systems off and proceeds to open the gates where the children are held. She is successful in freeing them and she and Billy work to get them back to their homes.

They have blocked the door from The Keeper, but it's only a matter of time before The Keeper arrives to collect and torment Billy. The Keeper attempts to capture Stacey with his stun-gun, The Keeper concludes that she has 'primitive responses', confirming his belief that she is mentally deficient. Stacey pretends to hear the emitted frequency and in a manic, vitriol-fueld manic rage, The Keeper decides to torture her. Stacey play the part only for a few seconds when she attempts to activate the alarm. The Keeper recoils in terror, telling Stacey that the alarm system will harm both him and Billy, and he taunts that "you wouldn't want to hurt your friend, would you?" Billy begs Stacey to activate it, and she happily agrees. Stacey moves to get Billy into the transporting chamber, and soon The Keeper is down on his knees in total agony, a victim of his own nefarious invention. The Keeper vows to find Stacey and bring her back.

Though he threatened to capture Stacey again, he has never returned. His zoo failed, and It is implied that he either went insane or has since perished, possibly both. 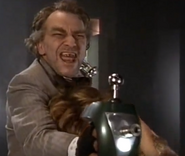 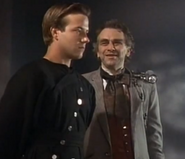 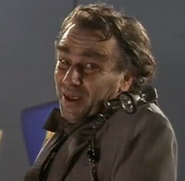 Retrieved from "https://villains.fandom.com/wiki/Keeper_(Are_You_Afraid_of_The_Dark)?oldid=3705137"
Community content is available under CC-BY-SA unless otherwise noted.