The Guy in The School Uniform (by Angelo)

Find someone who can kill his father

He was voiced by Tomoyuki Shimura and Mariko Higashiuchi in the Japanese (as an adult and a child respectively), and by Jason Marnocha (who also played Orochi in One-Punch Man and the Demon King in The Seven Deadly Sins) and Morgan Berry in English (again, as an adult and a child respectively). In JoJo's Bizarre Adventure: Diamond Is Unbreakable Chapter I, he was portrayed by Masaki Okada.

Twelve years prior to the story's events, Keicho's and Okuyasu's mother perished. Due to this and the rough economic period had, their father was pushed to his limits, physically abusing the children when life got rough. After two years, however, their father was hired by DIO as his servant and received riches due to this, as DIO was searching the globe for a Stand User who could shape reality to his wishes. Due to misplaced trust, DIO implanted pieces of his body into him, which upon DIO's demise, caused their father to mutate into a hideous, self-healing form.

Forced to care for both his younger brother and his ailing father, Keicho obtained the stand arrow and bow to find a stand user who could end his father's life. Due to these actions, Anjuro Katagiri, Tamami Kobayashi, Toshikazu Hazamada, Akira Otoishi, Yukako Yamagishi, and Rohan Kishibe all became Stand Users.

After Anjuro's defeat, Josuke and Koichi happen upon Keicho's house, with Okuyasu serving as a guard to it. Keicho uses the scuffle to stab Koichi with the arrow, which would soon grant him Echoes. Okuyasu and Keicho have their duel, with Keicho dragging Koichi inside to return his arrow. As Josuke defeats Okuyasu and enters the house, he is soon forced to leave after Okuyasu reveals Bad Company's attack on accident.

Eventually, the two return to the house to find Koichi is unharmed, with Josuke revealing Bad Company. Using his troops as a distraction for the heavy artillery, Josuke is saved from a tank's blast but is soon surrounded by the troops. When the egg for Echoes fails to impress Keicho, he turns his attention back on Josuke, planning to wound him in his limbs to make him unable to fight. After Koichi is knocked down after a failed warning, Josuke marches forward despite the fire only for a mine to stop him in his tracks. With Josuke on the ground and unable to stop the full swarm of helicopters, Josuke appears to be toast at first, but he uses two repaired missiles to send them right back on Keicho, defeating him.

Once the heroes discover his father, Keicho reveals his tragic tale, How he was abused by his father during their childhood, and his father started working for DIO and eventually turned into a monster after the Spore of DIO started to infect him after DIO's Death, with Josuke revealing that despite his father's ugly form and faults, he still loves his family. Although Okuyasu wants to find a way to cure his father rather than snuffing him off, Keicho considers them too far to back down. They can do neither, however, as Red Hot Chili Pepper ambushes the group, seeking the bow and arrow. Keicho bravely sacrifices himself to save Okuyasu (despite his last words insulting his brother for his weakness), before being dragged into the outlet the electrical evil-doer emerged from and was electrified to his demise, his remains lying on the nearby power lines.

During the final battle against Yoshikage Kira, his spirit appeared to Okuyasu when he was on the brink of death, urging him to turn back to the realm of the living.

Keicho's stand, Bad Company, is a complete miniature army composed of soldiers (armed with small firearms, knifes, and grenades), missile-armed helicopters, land-mines and even tanks, all under his control. Like a real army, they act like real soldiers, using warfare tactics to fight. Destroying some soldiers will do nothing to Keicho (in his own words, it only ruins the formation), so the only way to defeat him is to attack Keicho directly. It is unknown what effect killing every last soldier would have. 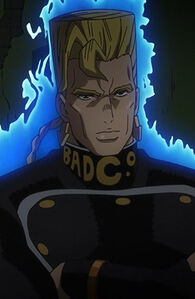 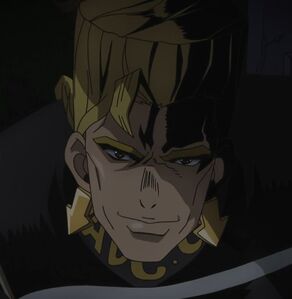 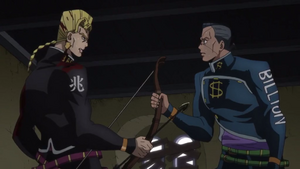 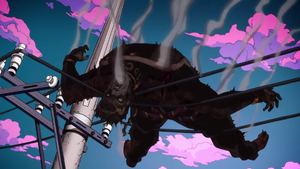