Obtain the White Pandora Panel and use it to become more powerful.

He was portrayed by Tamiyasu Cho.

Keiji Uraga was originally a test subject of the Faust organization that was forcibly transformed into the Zebra Lost Smash and then beat to death to extract the Zebra Lost Bottle.

As UN representative and secret Downfall member Simon Marcus was meeting with Prime Minister of Japan Taizan Himuro to discuss the Rider System, Keiji Uraga hacked into the Guardian robots serving as guards and led several Downfall members in an attack on the government building. Gentoku Himuro transformed into Kamen Rider Rogue to fight the members off, but Simon Marcus then revealed his allegiance to the Downfall organization and transformed into Phantom Crusher, using its power to remove Gentoku's ability to transform and force him out of his transformation.

Uraga then sent a Phantom Crusher and some hacked Guardians to attack Sento's workshop and steal the White Pandora Panel. However, after the Downfall member returned Uraga discovered the panel was a fake and smashed it before executing the Downfall member for his failure.

After discovering that somehow Kazumi Sawatari and the Hokuto Three Crows were immune to Phantom Crusher's powers, Uraga went to kidnap Misora Isurugi to lure them out. The Hokuto Three Crows and Kazumi eventually showed up to save her, but Uraga transformed into Kamen Rider Metal Build and defeated all four of them, critically wounding the Hokuto Trio. Returning to Downfall's headquarters, Uraga kills Simon Marcus to assume his position before delivering a broadcast to the people of Japan as Downfall members and hacked Guardians attack the streets. Eventually, after drinking a concoction of Nebula Gas that made them regain their ability to transform, the other Riders accompany Kazumi to rescue Misora from Downfall's headquarters. Transforming into Kamen Rider Grease Blizzard, Kazumi storms the building and fights off Downfall's forces before being confronted by Metal Build. As the two face off, a Phantom Crusher swoops in from behind and causes Grease to drop the White Pandora Panel, allowing Metal Build to seize it and absorb it to assume a new form, which he dubs "Phantom Build".

However, Kazumi then uses the Grease Perfect Kingdom power-up Sento developed for him to transform into Kamen Rider Grease Perfect Kingdom. With this new power, Grease fights and soundly defeats Phantom Build, fatally wounding him. As he fades away, Keiji Uraga exchanges some final words with Kazumi before his body dissolves and leaves behind the White Pandora Panel. 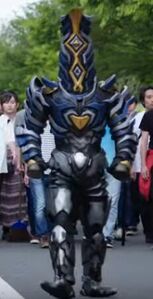 Zebra Lost Smash
Add a photo to this gallery

Retrieved from "https://villains.fandom.com/wiki/Keiji_Uraga?oldid=4053428"
Community content is available under CC-BY-SA unless otherwise noted.