Battling and killing other monsters.

Conquer and claim the entire Earth for the Xiliens and his master.

Wipe out all of humanity, alongside his masters.
Defeat and kill Godzilla once and for all (all failed).

Keizer Ghidorah, also known by his previous form named Monster X, is the secondary antagonist of the Godzilla film Godzilla: Final Wars. He is a monster of the Xiliens summoned by X through the Gorath asteroid to help conquer Earth. He is the archenemy of Godzilla.

He was portrayed by suit actor Motokuni Nakagawa.

It is unknown if the Xiliens themselves created Monster X or if he was simply discovered by them. Monster X was called down to Earth by the Xiliens so as to take care of Godzilla. Descending to Earth in a meteor called Gorath, the King of the Monsters and Monster X began battling each other. Though this new opponent had the advantage at first, the fight came to a standstill. Mothra appeared to help Godzilla while Gigan was sent in to aid Monster X. Gigan quickly defeated Mothra and teamed up with Monster X to overcome Godzilla. However, Mothra returned and attacked Gigan, and the two eventually finished each other off. This left Godzilla and Monster X to face one another with the King of the Monsters managing to pummel him.

During the showdown, Controller X, the superior of Monster X, was destroyed along with his ship, leaving Monster X in full command as the sole leader. Eventually, the beam attacks between the two monsters collided and knocked them both off their feet. Godzilla got to his feet to watch Monster X undergo a terrible transformation into Keizer Ghidorah - his ultimate and unrepressed form.

This horrifying space monster blasted his enemy with his gravity beams, using them to knock Godzilla to the ground, and then drag him all around the city. Keizer Ghidorah then sank his fangs into Godzilla, absorbing the King of the Monsters' very life force. However, the Gotengo fired a beam at Godzilla that gave him the power of Keizer, ancient energy that greatly increased the abilities of the one who possessed it. This allowed the King of the Monsters to free himself of Keizer Ghidorah's grip and blast him with his energized atomic blast, severing one of the heads.

Keizer Ghidorah attempted to blast Godzilla with a gravity beam, but Godzilla pulled his other head in the path of the beam, severing it as well. Godzilla then tossed the maimed Keizer Ghidorah up and down before hurling him into outer space and blasting him with his red spiral atomic beam, destroying him for good.

Monster X is a major antagonist and the Bigger Bad in the comic series Godzilla by IDW. Monster X and his fellow space monsters SpaceGodzilla, Hedorah, and Gigan invaded the Earth, forcing the United States military to free the various kaiju contained on Monster Island so they could fight the space monsters off. Monster X attacked New York City, where he was intercepted by Mothra. After defeating Mothra, Monster X was then attacked by Godzilla, Kiryu, and Kumonga, but was joined by SpaceGodzilla. The space monsters defeated Kumonga and knocked Kiryu into submission, but SpaceGodzilla was frozen by a blast of Kiryu's Absolute Zero and subsequently defeated when Godzilla finished him with his atomic breath. With only Monster X and Godzilla still standing, Monster X transformed into his true form, Keizer Ghidorah. Keizer Ghidorah dominated his weakened and smaller opponent, tossing him into the sky and blasting him across New York City with his gravity beams.

The tables were soon turned when Godzilla's ally Rodan arrived and decapitated one of Keizer Ghidorah's heads with a sonic boom from his wings. Godzilla seized the opportunity and fought back against Keizer Ghidorah, severing another head with his atomic breath. With Keizer Ghidorah laying hopelessly maimed on the ground, Godzilla stomped on the creature's remaining head repeatedly, crushing his skull and killing Keizer Ghidorah.

In the comic series Godzilla: Ongoing, Monster X's origins are equally cryptic. According to the Shobijin, Monster X is a creature who is "both of this world, and not of this world." Later comics establish that Monster X is likely of the same species as King Ghidorah, who is established to be a space-faring alien beast in Godzilla: Rulers of Earth.

Monster X/Keizer Ghidorah was briefly considered for the game Godzilla: Unleashed, but creator Simon Strange said that he "wasn't interesting enough" and it would be too complex to animate his transformation.

Keizer Ghidorah makes his first video game appearance in the 2015 mobile game Godzilla: Kaiju Collection. Both his Monster X and Keizer Ghidorah forms are playable and are two of the most powerful kaiju in the game.

Whether he was mind-controlled or not, Monster X shows pure malice by relentlessly and sadistically fighting and torturing Godzilla. He seems to take pleasure in causing Godzilla pain, such as when he twists Godzilla's wrists and suspends him into the air and when he holds Godzilla still for Gigan to slice him with his chainsaws. Monster X's maliciousness is further demonstrated when he continues the battle even after Gigan and the Xiliens are defeated and any mind-control the Xiliens had over him is severed. After transforming into Keizer Ghidorah, Monster X blasts and beats Godzilla mercilessly across Tokyo, throwing him around with his gravity beams and kicking the weakened Godzilla in the head.

As Monster X, he can fire electric beams known as Destroyed Thunder from his eyes and shoulder skulls and levitate and has demonstrated the ability to withstand Godzilla's atomic blast at point-blank range. As Keizer Ghidorah, he is even larger and stronger than he was as Monster X and possesses the same abilities as King Ghidorah. In this form, from his mouths he can shoot Antigravity beams that are able to telekinetically pick up, throw and manipulate objects, as well as an energy-draining bite. Though he possesses wings, it is unlikely he can fly very much because of their size and only uses them to crush enemies with his bulk. However in the comic series Godzilla: Ongoing, Keizer Ghidorah is able to fly fairly competently. 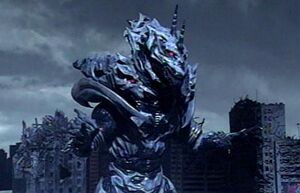 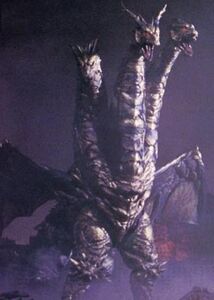 Keizer Ghidorah in his true form. 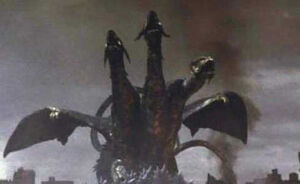 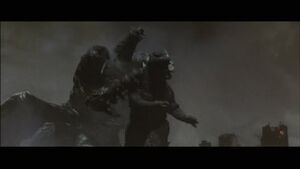 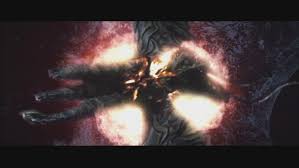 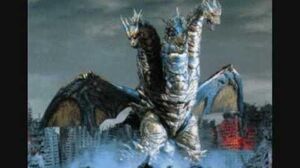 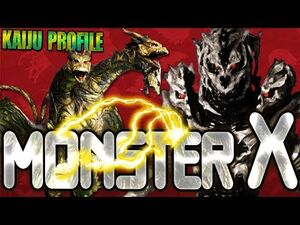