Transformation into a shield. (Keller)

Transformation into a mirror. (Mirror)

Keller and Mirror are female spies in silver and gold respectively and antagonists in Denshi Sentai Denziman. Keller can change into a shield, and Mirror a vanity mirror.

They are portrayed by Chiaki Kojo and Rie Yoshikawa.

Keller and Mirror accompanied the rest of the Vader Clan to Earth for their invasion.

After Demon King Banriki took control of the Vader Clan, Keller and Mirror conspired with Queen Hedrian to kill him. Keller died during the assassination attempt, when she turned herself into a shield to protect Hedrian from on coming daggers. Mirror pretended to be loyal to Banriki, but assisted Hedrian in helping the Denziman defeat Banriki Monster. After Mirror discovered Banriki Monster's weak point in its tail, she transformed into a crystal ball for Hedrian to use to tell the Denziman of the weakness. After Banriki Monster's destruction, Banriki confronted Hedrian but Mirror blinded Banriki using magic. In a blind attack, Banriki struck Mirror with his weapon, killing her. 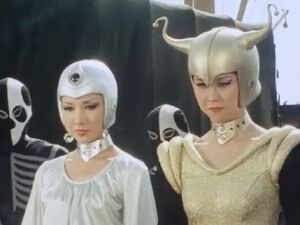