Having sexual affairs with lovers from both genders.

Kelly Van Ryan is one of the main antagonists of the 1998 film Wild Things.

She was portrayed by Denise Richards.

Kelly tells her mom, Sandra, that high school guidance counselor Sam Lombardo raped her one day when she skips school and then they go to the police. Detectives Ray Duquette and Gloria Perez are assigned to the case. Meanwhile Sam hires attorney Ken Bowden, who reveals to Sam that behind Kelly's all-American "girl next door" image, she is an amoral, sexually confused cocaine addict who hates her family.

When the trial starts, Bowden cross-examines Kelly's classmate Suzie Toller, who told Duquette and Perez that Sam raped her as well. Bowden threatens to have Suzie imprisoned unless she tells the truth about Sam. She says that Sam didn't rape her or Kelly and that they made up the charges to get revenge against Sam for getting them in trouble at school. Sandra is embarrassed by the verdict and settles with Sam for $8.5 million. It is soon revealed that Sam, Kelly, and Suzie had planned everything and sleeping together. They plan to divide the money between them.

Duquette thinks that this is all a game, that the 3 made up to get rich and get even with Sandra in the process. He interviews them and then gets into it with Kelly at her guest house. This results in Kelly getting killed.

In a post credit scene, it is shown that Kelly was trying to escape the guest house when Ray entered. This results to her getting punched in the stomach and lays on the ground in pain. Ray then breaks the gun case and pulls out a Walther PPK, with which he kills her in cold blood. 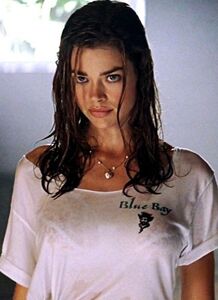