Noble of the Friege family

Kempf is a major antagonist from Fire Emblem: Thracia 776. He is a very arrogant noble of the Friege family and the self-proclaimed rival of Reinhardt, whom he deeply envies. He is also the archenemy of Olwen because of his hatred towards her.

Kempf was first introduced when Olwen asked for reinforcement from him, but he refused to aid her, claiming she could not identify the enemies. When Olwen said that Largo was in danger, Kempf proclaimed that Largo would die anyway because of his great age, and mocked Olwen that she would ran in tears to her brother Reinhardt, whose only talent was to seduce women.

Kempf's attitude greatly enraged Olwen and provoked her into attacking him, causing him to declare her as a traitor. After Olwen was imprisoned in the dungeon of the fortress, he revealed that he intentionally provoked in hopes of outraking Reinhardt. During his battle against Leif, he uses Fred as bait to lure Leif into a trap of being isolated in a single area with many surrounding ballistae attacking.

When Leif seized Dandrum Fortress, Kempf cowardly abandoned all of his soldiers and fled to the dungeon beneath it. Before escaping, he ordered his subordinates to initiate a "Murder Hollace", which essentially meant that they are ordered to fight to the death.

Later, Kempf was guarding the Norden Line and received strict orders not to leave his position at the bridge. Before Kempf entered his next battle with Leif's army, Nicolov rebuked him for his cowardice in Dandrum and told him not to be too confident in himself.

If Olwen spoke to Kempf during the chapter, she will pointed out his cowardice and said that he will never compare to Reinhardt. Kempf was enraged and left his position to attack Olwen, and he would potentially be slain by her (determined by the players). 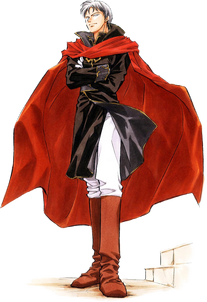 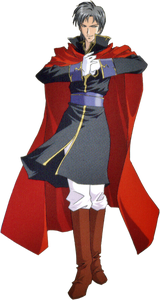 Retrieved from "https://villains.fandom.com/wiki/Kempf?oldid=3799750"
Community content is available under CC-BY-SA unless otherwise noted.