Centuries prior to the formation of the Fire Nation (originals).

Abduct children of Fire Island and haunt their oppressors to avenge the loss of their own children (original, abandoned).

The Kemurikage are dark spirits from Fire Nation legends, and the false antagonists of the Smoke and Shadow comic trilogy, the fourth trilogy to take place between Avatar: The Last Airbender and The Legend of Korra. While the original Kemurikage are sprits who punished warlords for their crimes, the ones who appear in Smoke and Shadow are actually human impostors.

Prior to the establishment of the Fire Nation, the Fire Islands were constantly battled over by ruthless warlords. One warlord named Toz retaliated against a single village who defied him by kidnapping their children. The mothers of these children died out of sadness and became the Kemurikage, dark spirits that haunted Toz and his men and stole away their children as revenge. Out of fear, Toz's men abandoned him, crushing his regime.

Although the legends thereafter told they haunted the Fire Nation out of "insatiable sadness", they actually returned to the Spirit World once the Fire Islands were united. Parents from Mai's home village would often tell their children that when they misbehaved, spirits from the mountains called the Kemurikage would snatch them away in the middle of the night. Michi heard the stories as a child and told them to her children as well.

On the eve of Yu Dao's inaugural celebration, a group of females impersonating the Kemurikage, led by Azula, appear before Ukano and berate him for his failures as governor of New Ozai. They offer him a chance at redemption by telling him to overthrow Zuko and reinstate Fire Lord Ozai, arguing that stability and safety come from strength. After failing the first time, the Kemurikage offer him a second chance, giving him a month to make good on his mission, else they take away all he holds dear.

Aang, Zuko, Mai, and Kei Lo investigated the Dragonbone Catacombs to get a clue about the Kemurikage. Following a wisp of smoke thoughout the Catacombs, it takes the form of a masked woman, one of the original Kemurikage, who recalls their true nature. Stating that the Kemurikage have not entered the human realm after the Fire Islands were united to become the Fire Nation, Aang and co. realize that the Kemurikage kidnapping the children are impostors. 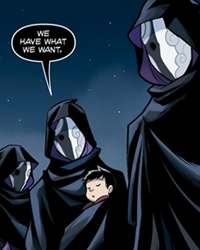 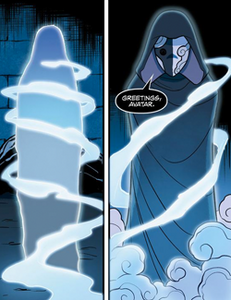 Revival of the original soul