Kill Barry Benson as revenge for making him jealous and being with Vanessa (failed).

Kenneth, mostly known as Ken, is the secondary antagonist of DreamWorks' fifeenth full-length animated feature film Bee Movie. He is the ex-boyfriend of a florist named Vanessa Bloome, who is friends with a talking bee named Barry B. Benson (the protagonist of the film).

He was voiced by Patrick Warburton, who also played Kronk in The Emperor's New Groove, Royal Pain's disguise voice in Sky High, and Blag in The Wild.

Ken is shown to be a short-tempered and energetic individual. He is an argumentative rival who fears bees and hates honey due to his bee allergies. He greatly enjoys yogurt night, tennis and can be very jealous when his activities and possessions on intruded on. He was also shocked to find out bees were sentient and could talk.

Despite his flaws, he can occasionally be self-motivated and persuasive especially when he plays tennis or other physical activities. He also initially tried to on friendly terms with Barry before a series of misunderstanding led him to believe Barry was trying to steal Vanessa from him.

Ken was first seen playing tennis with Vanessa, both not noticing Barry on the ball after getting stuck on it while he was with the Pollen Jocks. He is later seen again when he and his friend Andy and his girlfriend were talking.

Just as Ken saw Barry on Andy's girlfriend's guacamole, he got out his winter boots and prepared to squash him, but Vanessa comes in and stops him. She rips up his brochure so she can set Barry free, berating Ken for believing that his life has more value than that of Barry's.

Later, it is shown that Vanessa and he have yogurt night on every part of the week, and when Barry shows up, he is confused about Barry and Vanessa's team up to sue the humans for stealing the honey, but accepts it. She takes him out so she and Barry can be alone, which raises Ken's fuse who yells why is "Yogurt night so difficult."

As Barry and Vanessa manage to strengthen their case at court against the honey companies (represented by their lawyer named Layton T. Montgomery), Ken arrived one day to Vanessa's place, where he found Barry sitting in Ken's usual chair and Vanessa revealing she borrowed Ken's razor to shave Barry's fur. Vanessa then revealed Barry criticized Ken's resume by pointing out eating with chopsticks wasn't a special stick whilst continuing to talk about Barry and his case, rousing Ken's jealousy. When Vanessa left the room, Ken became hostile with Barry and accused him of trying to usurp him despite the bee's intention to be friendly.

Ken prepares to kill Barry when Benson goes to clean Vanessa's bathroom, Ken attacks Barry with an Italian Vogue and tries to flush him down the toilet, to no success. Upon seeing this, Vanessa stops Ken and berates him for his jealousy against Barry, but Ken refuses to let go of it, resulting in an annoyed Vanessa breaking up with Ken and telling him to leave. An upset Ken reluctantly leaves, but not before he tells Barry that he would rather eat artificial sweeteners instead of honey. Barry then sadly tells Vanessa he always felt there was a barrier with him and Ken even though he wanted to connect.

Ken is last seen in the epilogue, seeing that Barry has opened up a new successful law firm office in Vanessa's flower shop to handle disputes between animals and humans. Ken angrily claims that "bee is living my life" and demanding to know "when will this nightmare end", but an annoyed Andy guides him away, telling him to let it go and move on with his life. However, Ken is too upset to do so as he cries pathetically, still refusing to let go of his jealousy against Barry.

In the Bee Movie game which features scenes after the movie, Ken is seen intercepted by Bee reporters from New Hive Tonight, when he was getting out of his car to enter his house. The bee reporters try to flatter Ken and get an interview with him for his side on the story between him, Barry Benson and Vanessa Bloom, but Ken calls the reporters, "Jackals", and shoos them away.

When Barry is interviewed by talk show host, Jeanette, on Ken, he at first says he has nothing against Ken and that he has trouble remembering Ken's name, but gets scared when a minor hive-quake happens, causing him to mutter "not the Italian Vogue." Jeanette then asks Barry if there was a love triangle between him and Ken for Vanessa, but Barry denies there was any such relationship, saying Vanessa is a human and he's a bee.

Like all the other voice actors, Patrick Warburton reprised his role. 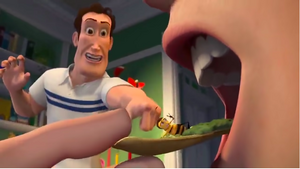 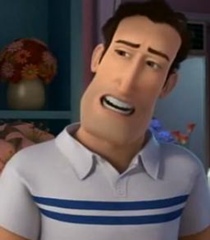 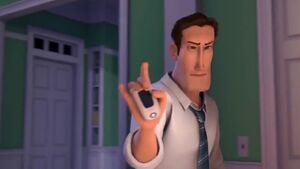 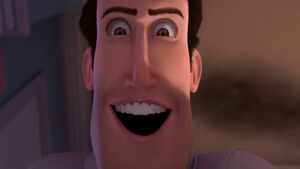 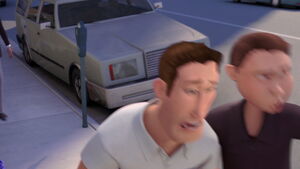 Ken being comforted by Andy in his final scene. 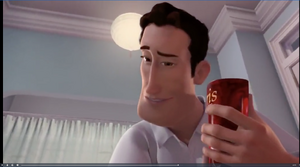 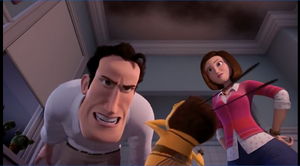 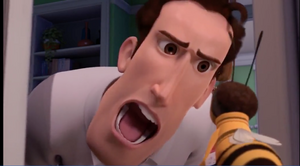 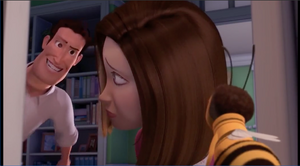 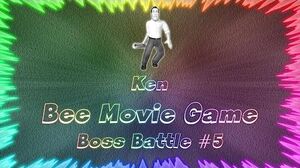