Middle School: The Worst Years of My Life

Punishing the students and school staff.

Ruining creativity.
Making the others follow his unjustified rules while he breaks them.
Man handling Gus the janitor.
Bossing others around.

Find the person who defaced the school and punish him for it (succeeded).

Rig the B.L.A.A.R. so test scores would go up and he could maintain his control over the school and earn a big bonus.
Stop Rafe from ruining his plan (both failed).

Principal Kenneth "Ken" Dwight, simply known as Ken Dwight, is the main antagonist of the 2016 comedy film Middle School: The Worst Years Of My Life. He was the former principal of Hills Village Middle School, and the archenemy of Rafe Khatchadorian.

He was portrayed by Andrew Daly of MADtv fame, who also played Mayor Brown in Yogi Bear.

Ken Dwight is the uncaring, tyrannical and deceptive principal of Hills Village Middle School, who runs the school as if it were a prison. He is aided by his right-hand Vice Principal Ida Stricker, who is in alignment with his bullying tactics. He makes all of his students follow his code of conduct; it is filled with rules that are mostly unjustified and unlawful. A new student named Rafe Khatchadorian (the protagonist of the film) already gets on Dwight's bad side when he draws an insulting picture of Dwight as a blabbering zombie in his notebook during an assembly that gets seen by other students. As stated in the school's code of conduct, any reading material deemed inappropriate would be destroyed, so Dwight destroys Rafe's notebook containing all of Rafe's old drawings by dumping it into a bucket of acid, which totally devastates Rafe afterwards.

Upset by this, Rafe decides to get even by breaking the rules of Dwight's code of conduct in retaliation. During the time, Dwight notices that ever since the rule breaking started the test scores started slipping, so he tries to do whatever he can to find the culprit and punish him. Dwight tried to handle all the rule breaking, but after the trophy case was turned into an aquarium it drove him off the deep end, deciding to expand the rules. Dwight then notices that the students that have low test scores are from the remedial class, so Dwight plans on illegally cutting off the remedial class (led by Rafe's favorite teacher Mr. Teller) from the upcoming test called B.L.A.A.R., as he wants to improve the average test scores. To that end, he frames the students of the remedial class for the pranks before suspending them. An outraged Mr. Teller objects to this by stating that this is a setup, but this only leads Dwight to personally fire Mr. Teller after falsely speculating that he may be involved with the pranks. Unwilling to let Mr. Teller and the remedial class take the fall, Rafe heads over to Dwight's office and confesses that he's the one responsible for the pranks. However, Dwight did not seem to care and he offers a deal with Rafe to uplift his suspension in exchange for his silence, but Rafe refuses and demands Dwight to un-suspend the students and give Mr. Teller his job back or he was "gonna make it rain". Rafe then sets off a false fire alarm to prove his point, but this resulted an angry Dwight to expel Rafe for his actions. Rafe's mom Jules is very upset at her son for getting kicked out of at least 3 schools and for not telling her that he had problems with Dwight. Jules's boyfriend Carl found a boarding school with some military aspects and Jules decides to send Rafe there since Hills Village Middle School was the last school that would accept Rafe, leaving Jules out of options.

Eventually, Rafe's girlfriend Jeanne Galletta found out that this whole turn of events was to cover up Dwight's actions of cutting off the remedial class from taking B.L.A.A.R. this whole time, having secretly recorded Dwight coercing the local janitor Gus into putting the evidence in the students' lockers to frame them for the pranks. Jeanne then points out the B.L.A.A.R. testing not only gives the school bragging rights, but it also gives Dwight a significant bonus if the scores are good enough, which is the main reason Dwight loves the B.L.A.A.R. so much. As such, the other suspended students agree to help Rafe expose Dwight's crimes, even Gus is willing to tag along as he's had enough of Dwight's behavior. The next day, as the entire school is about to take the B.L.A.A.R., Rafe and his classmates interrupted several procedures to expose Dwight's deceitfulness. Rafe tells all the students that Dwight is nothing but a hypocrite who likes to make the rules, but he thinks that since he's the Principal he's doesn't have to follow the rules himself. Finally fed up with Rafe's actions, Dwight begins to chase Rafe, only to be tripped by one of the students. With Stricker failing to catch Rafe as he jumps into a cart with Gus and drives off, Dwight snatches a student's bike and tries to catch up to them. An animated chase sequence ensues, where zombie Dwight chases, on motorcycle, Rafe and Gus, who are in a sports car. Rafe throws Gus' lunch at Dwight, to no avail. Rafe then summons his artwork to life from his sketch book, from and ape to a kitchen sink.

When Dwight finally catches up to them, Gus launches a pile of manure on Dwight just as Mr. Teller arrives with the local superintendent Hwang, who received a formal complaint from Mr. Teller about the events. Dwight tries to deny everything by stating that Rafe is a dumb jerk and that nobody cares what Mr. Teller thinks, but Hwang isn't fooled by this. Rafe proceeds to present Hwang with the tape exposing Dwight and Stricker's crimes. After viewing the tape, both Dwight and Stricker are terminated from their respective positions.

Dwight is last seen packing up his things as Hwang demands him to leave the school with Stricker. Dwight demands for a full hearing, to which Hwang assures that he'll have it in court as she plans to have him and Stricker prosecuted for their crimes. As Dwight leaves he is pranked one last time with green dye in his hat, but decides to take a joke for once since he can't do anything about it.  Rafe is welcomed back into the school and praised as a hero for exposing Dwight's true colors, and it is implied that Dwight will face a sentence in prison along with Stricker for their crimes. 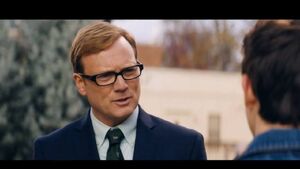 Dwight telling Rafe that on the campus he must follow the rules. 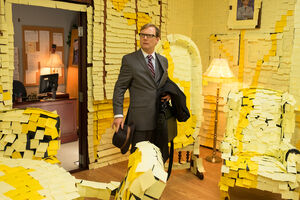 Dwight witnessing Rafe's first prank of putting sticky notes everywhere in the school, including his office. 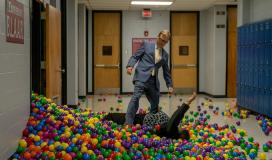 Dwight looking on as Vice Principal Ida Stricker falls victim to Rafe's second prank of putting plastic balls in the one of the school's closets.

Zombie Dwight in one of Rafe's fantasy sequences. 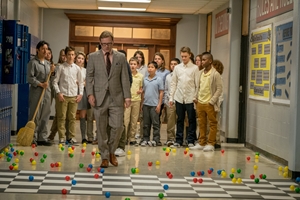 Dwight framing the remedial students for the pranks. 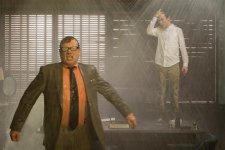 Dwight being subjected to a false fire alarm caused by Rafe after refusing to uplift the suspension on the remedial students. 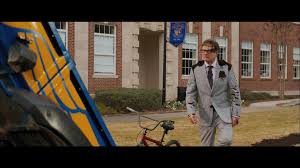 Rafe and Mr Teller revealing Dwight's true colors to Superintendent Hwang before his dimissal.
Add a photo to this gallery

Retrieved from "https://villains.fandom.com/wiki/Ken_Dwight?oldid=3549456"
Community content is available under CC-BY-SA unless otherwise noted.