Hunting dinosaurs and collecting their teeth as trophies.

Round up the dinosaurs for Eli Mills to sell (failed).

He is a mercenary employed by Eli Mills to capture the dinosaurs on the island of Isla Nublar for him so they can be sold off.

He was portrayed by Ted Levine, who also played Buffalo Bill in The Silence of the Lambs, Karkull in Superman: The Animated Series, Rusty Nail in Joyride, Bloodbath McGrath in Wild Wild West, and General Russell Woodman in Evolution.

Ken Wheatley and his team accompanied Claire and the Dinosaur Protection Group to Isla Nublar to round up the dinosaurs and deliver them to another island reserve since a volcanic eruption is imminent and will kill all the dinosaurs. However, after Owen tracks down the last surviving Velociraptor (known as Blue), Wheatley and his men betray Owen by capturing Blue before leaving Owen, Claire, and Franklin to die while keeping Zia to perform surgery on Blue since he needs her alive. As it turns out, Mills plans to capture all the dinosaurs and sell them off as sentient weapons for profit, and that Wheatley is involved with it as he intends to collect a 'significant bonus' for his assistance. To that end, Wheatley and his men managed to capture several more dinosaurs before transporting them into their ship through cages while collecting their teeth as trophies to make as a necklace.

After reaching the mainland, Wheatley soon learns that Owen and his friends have evacuated. To that end, he gets several of his men to capture them at gunpoint before putting them in a cell per Mills' orders. With the dinosaurs delivered to the auction, the event is disrupted when Owen releases a Stygimoloch to cause havoc, sending several people to flee away from the scene. In the ensuing chaos, Wheatley looks for Mills demanding his bonus before he attempts to go inside the cage of the genetically engineered dinosaur (known as the Indoraptor) to retrieve one of his teeth as a trophy for his necklace, shooting him with two tranquilizer darts to keep him from attacking him. However, Wheatley soon discovers too late that the dinosaur was only pretending to be stunned, allowing the Indoraptor to bite off his arm and gulping it down, leaving Wheatley helpless and at the mercy of the creature. The Indoraptor then proceeds to maul Wheatley to death before escaping from his cage and slaughtering more people (including Gunnar Eversol) along the way.

At first, Wheatley appears to be jovial, polite, and even empathetic, as he noticed the sad looks of Owen and Claire and asked them if that was "bad memories". He also tried to prevent Zia from going with them to capture Blue, warning her the situation could turn hairy.

Later, however, his true intentions came to the light, and Wheatley is revealed to be a cold and sadistic poacher. His sadism is proven when he heartlessly ripped out a tooth from a conscious Stegosaurus. He is also sarcastic and prone to contemptuous remarks when his true colors are revealed. Wheatley is greedy, hence why he accepted to have a role in Mills's operation. Because of that, while not outright abusive, he does not care at all about his men and prioritizes the capture of the dinosaurs, as seen with Blue when he tells his men to not hurt her even when she wounded a mercenary before. He clearly takes pleasure in his job nevertheless, ripping the teeth of dinosaurs to keep them as trophies. It is hinted he also holds contempt towards women, calling Zia a "nasty woman" and threatening to kill her if she doesn't cure Blue.

Wheatley's bravery and recklessness prove to be his downfall, as when he shoots the Indoraptor, he does not bother to check if he is really asleep, allowing the latter to attack him. When he is about to die at the mercy of the dinosaur, Wheatley breaks down completely and cries out of fear.

Ken Wheatly received negative reception. Fans found him to be a laughable and ineffectual character, due to failing to notice the Indoraptor being still conscious, putting his reputation as a hunter into question.

Ken with the other mercenaries. 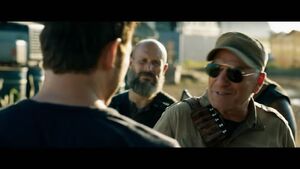 "Holy cow. What are you? I didn't see you on the island."

Ken tries to cut off the Indoraptor's tooth, not noticing the latter smiling before killing him.

Ken discovers that the Indoraptor was actually playing possum.

Ken about to be killed by the Indoraptor. 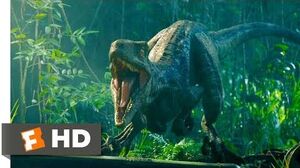 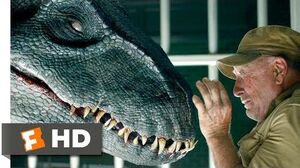