Yakuza of the Shie Hassaikai
Member of the Eight Bullets

Kendo Rappa is a minor antagonist in the manga/anime series My Hero Academia. He is affiliated with the Shie Hassaikai and a member of the organization's Eight Bullets.

He is voiced by Shouhei Kajikawa in the Japanese version, and Eric Rolon in the English dubbed version.

Kendo is a large, muscular man with long, light-colored hair. He wears a plague mask given to him by the Shie Hassaikai, and dons a tattered t-shirt and dark pants covered by a light tunic and decorated with two belts. Kendo also sports his signature gloves, which cover his hands with several leather straps and his knuckles with metal.

Kendo is a hot-blooded man obsessed with violence, and cares about nothing but having a satisfying fight to the death. He has a strict code of fighting, believing that weapons are unbecoming and a real fight is one where both sides use only their natural abilities. If someone can give him the thrill he seeks, he shows that person great respect. However, if they can't do this, then he loses all interest and wants nothing to do with them.

Despite being a member of the Shie Hassaikai, Kendo has no loyalty or respect for Chisaki and only works for him because he wants to one day defeat him in a fight. He also has code of honor, as shown when he refused to let Hekiji help him in his fight and let Fat Gum take Kirishima to heal his wounds. Kendo even went as far as to acknowledge how strong Kirishima was, referring to him as a man and sought thrill in battling with him once more.

Kendo used to spend his time in an underground fight club known as the Underground Masquerade, as a form of rebellion over his strict parents where he went by his ring name. In this club, people could go berserk with their Quirks. But because Kendo would easily win all his matches, he never got the fight to the death he truly wanted.

At one point during his time, he went by the alias known as the Rapper and faced off against his opponent, the Ripper (who was in fact Iwao Oguro as he intended to exploit the usage of illegal Quirk-based drugs used in the underground arena). Rappa was initially displeased to see his opponent rely on weaponry as he preferred his fights to be fist-based, but after overwhelming Oguro with his Quirk, Oguro discarded his knife and chose to fight him hand to hand combat, much Rappa's excitement.

Sometime down the line, Kai Chisaki approached Kendo to recruit him into the Shie Hassaikai. Kendo left the decision up to whoever won their fight, and attempted to attack Chisaki only for the latter to "kill" him and bring him back to life with his Quirk. Because of this, Kendo joined the Shie Hassaikai with the sole objective of defeating Chisaki. He has since been killed all five times he's challenged him.

Kendo is paired with Hekiji Tengai and sent to fight the heroes invading the Shie Hassaikai hideout to give Chisaki time to escape with Eri. Mimic sends Fat Gum and Eijiro Kirishima into a dark room where Kendo charges at them with a barrage of punches, breaking through Kirishima's Red Riot Unbreakable technique. Fat Gum attempts to retaliate against Kendo but is stopped by Hekiji's barrier, declaring himself and Kendo to be a "Sword and Shield" as opposed to the two heroes being a "Shield and Shield".

Kendo then hits Fat Gum with another barrage, expressing disappointment in his defense but praising him for holding out and not becoming grind meat. Fat Gum then challenges Kendo to a fight to see who's the strongest, causing Kendo to become excited and order Hekiji not to help him with his barrier. Hekiji reminds him that Chisaki paired them together because their Quirks work well together and will ensure victory, but Kendo attacks him and argues that Chisaki paired them without asking and he doesn't care what he wants; causing Hekiji to relent and let him do as he pleases.

Kendo then returns his attention to Fat Gum and continues his assault as Kirishima remains frozen with fear over his technique being broken; with Hejiki noting that the young hero has lost the will to keep fighting. However, as Kendo finishes his barrage and prepares for the next one, Hekiji notices that Fat Gum is planning something and tells him to finish things quickly.

But Kirishima, having found his resolve again, jumps in front of Fat Gum and uses Red Riot Unbreakable to take all of Kendo's punches; repairing his hardened skin whenever he breaks through it. Kendo, surprised that Kirishima can withstand him, becomes thrilled and praises his resilience. Kirishima attempts to do a counterattack, but is stopped by Hekiji's barrier, with the latter declaring that meaningless actions should fall before his defense. But as Kirishima falls to the ground, Fat Gum reveals that his actions weren't in vain, as it gave him the time needed to store up all the energy he absorbed from Kendo's punches and unleash it on the two in one powerful blow; declaring himself and Kirishma the winners in this "Sword and Shield" battle.

However, Hekiji managed to put up a barrier with maximum defense that took the brunt of Fat Gum's final attack and kept him and Kendo from losing consciousness. But to both Hekiji and Fat Gum's surprise, Kendo asks him to take Kirishima into the next room where there are medical supplies and treat his wounds. Hekiji questions Kendo's selfish actions, only for Kendo to get annoyed and knock him out. Fat Gum asks what Kendo's intentions are, and he explains that Kirishima gave him the satisfying battle he's been looking for and he wants to fight to the death with him once all his injuries are healed. As Fat Gum starts treating Kirishima's injuries, he asks Kendo why he joined the Hassaikai. Kendo tells him that Chisaki is the one person he ever lost to and he only sticks around to defeat him. Fat Gum then asks what Chisaki's goal is, and Kendo reveals that he plans to revive the Yakuza.

Kendo is later arrested and imprisoned along with the rest of the Shie Hassaikai in the aftermath of the raid. 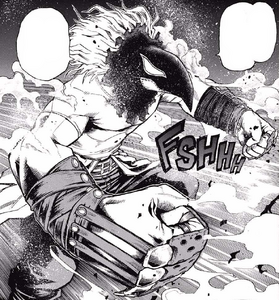 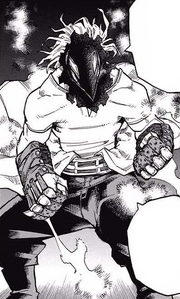 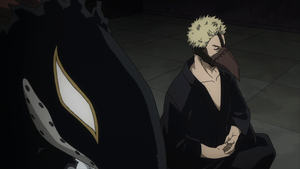 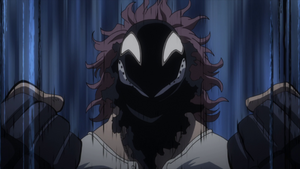 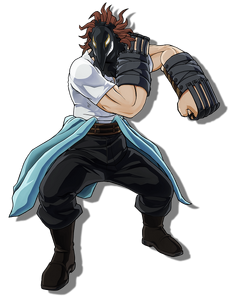 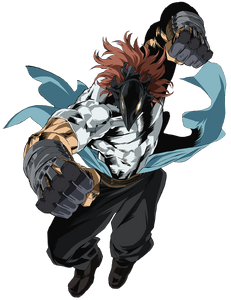 Kendo's official artwork for My Hero One's Justice 2.
Add a photo to this gallery

Retrieved from "https://villains.fandom.com/wiki/Kendo_Rappa?oldid=4063422"
Community content is available under CC-BY-SA unless otherwise noted.