Villains Wiki
Register
Don't have an account?
Sign In
Advertisement
in: The Amazing World of Gumball Villains, Man-Eaters, Mute,
and 13 more

Kenneth (The Amazing World of Gumball)

Increases his size anytime that he eat
Bite
Voracious appetite

Eat anything he can (failed)

Kenneth Watterson is the main antagonist of the Amazing World of Gumball episode "The Microwave", and the secondary antagonist in "The Finale".

He was accidentally created by Richard when he put the jar in the microwave thinking that it was his coffee. The microwave radiation gave life to him, so that Guball and Darwin thougth that they were his parents and freed he of the jar, only to Kenneth bite Darwin's eye and when he stop Gumball's neck so that they thing that he was hungry and they discover that it only like to eat meat. After that Anais enter in the kitchen and ask about Kenneth, later Gumball and Darwin put tramps for pigeons, leaving Anais alone with Kenneth who eat her. Later he also eats the mailman and the garbage in a trash can, so that they ask Richard for help to discipline him, only for to Kenneth eat Richard, revealing Gumball and Darwin that he is a man-eater, they hide into the house. When Nicole comes she doesn't believe Gumball and Darwin and go out where is eaten by Kenneth, after it Gumball and Darwin attack Kenneth and discover that all the people eaten by he was alive and Darwin try to take all-out tying with a hose and enter in Kenneth to Gumball push out the hose, nevertheless, Kenneth close his mouth and Gumball can't push out the hose but accidentally starts the hose and explode Kenneth, Richard want to kill him but Gumball convinces them to give Kenneth a second opportunity only to cut to a giant Kenneth overthrowing a helicopter. Kenneth is trapped in a jar and frezzed of unknowned form.

In "The Finale", he appears again when the Wattersons are doing chaotic actions, Richard and Anais free Kenneth who eat a bus and it's passengers and fighting against Hector Jötunheim. 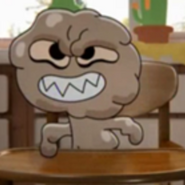 Kenneth on the The Amazing World of Gumball Wiki