Kenneth Dermot, also known as Kenny or Kick, is one of the bosses or psychopaths featured in the 2013 video game Dead Rising 3. He is initially a survivor who can be found at the South Almuda Construction Site in Chapter 3 in the side quest Time for a Hero, and then becomes an optional boss in the main mode that can be found again in Chapter 7 in Central City on the Crystal Of The Sea Yacht in the side quest Single White Man. He is a man who sees himself as worthless, and in addition, the zombie outbreak made him despair over his poor fate and the fact that he cannot save anyone. However, Nick helps him understand that he also can be special. Unfortunately, Kenny suffers from obsession and mania, so he began to view Nick as his idol to be noticed and praised by him. However, these desires quickly turned to hate, so he began to envy Nick his skills, so he kidnapped a young girl named Regina Thompson and tied her to a loudspeaker on a yacht so some zombies could devour her just so he could save her. Kenny is also one of the psychopaths who carry one of the Seven Deadly Sin. Kenny's sin is Envy. He is voiced by Ruben Dario.

Time For A Hero

Jamie calls Nick telling him that he has spotted a crying young man at a construction site in South Almuda. Nick Ramos heads to South Almuda and heads to the construction site where he spots Kenny crying. Nick asks him what happened and he replies that he is just a weakling and a failure because he cannot save anyone. Nick tries to convince him that he means something, but Kenny still insists that he is useless. Kenny asks Nick to show him his abilities by killing several zombies with his bare hands. After killing the zombie, Nick decides to tell Kenny about creating a modified weapon and creates one for him as a demonstration. After crafting the weapon, Kenny is impressed by Nick's abilities and begins to believe in himself and his abilities.

Sometime later, Kenny began to envy Nick's abilities and his reputation as a hero amongst others. Jamie calls Nick telling him that he has noticed Kenny again on the Yacht in Central City with a woman. Nick Ramos heads to Central City and heads towards the Crystal Of The Sea Yacht. In the very front of the ship, Nick sees a young woman named Regina Thompson tied to a stage speaker and a zombie slowly approaching her. Nick quickly kills the zombies and asks Regina if she's okay for which Kenny, wearing the same outfit as Nick, immediately becomes indignant, saying that he ruined the whole action for him. Nick is surprised to see Kenny and Regina pleads with Nick to untie her because Kenny and his visions will kill them. Kenny, however, stops him, saying that he has control over it, adding that the survivors sometimes really crack up because of being in trouble. Kenny tells Nick to go away because he thinks Nick came here to steal his chance for fame. After creating his own weapon, Kenny yells at Nick that he is the hero and not him, and attacks the main character.

After the fight, the defeated Kenny falls to the floor and tells Nick that he will let him go because he looks like he is about to pass out. After a while, zombies appear on board the yacht and Kenny begins to apologize to Nick for his behavior and begs him to save him as he would be a good helper. At this point, Nick can either save Kenny or leave him to the zombies. Like Paul Carson and Bibi Love in previous games, Nick has the option of saving Kenny's life and recruiting him as a survivor and ally (Kenny remorsefully pledging that he'll be Nick's sidekick). Leaving him behind gives nothing.

Defeating Kenny unlocks the Envious achievement and allows Nick to save both Kenny and Regina Thompson. 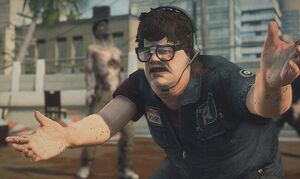 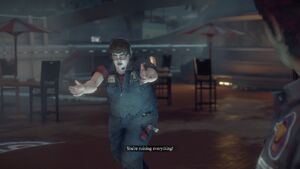 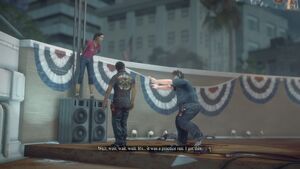 Kenny telling Nick that he has everything under control. 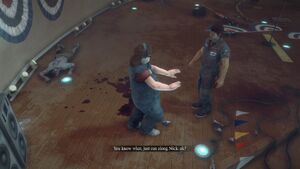 Kenny telling Nick to step away. 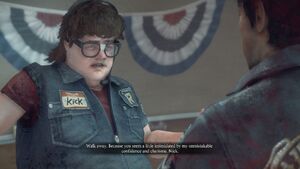 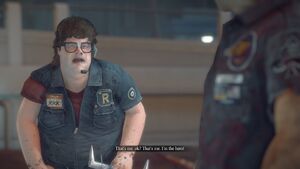 Furious Kenny telling Nick that he is the hero. 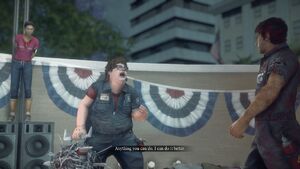 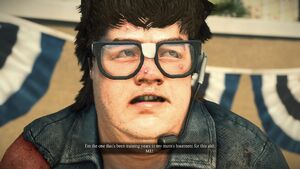 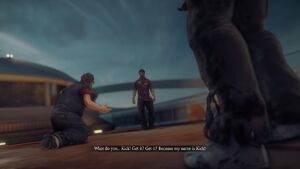 Kenny begging Nick to save him. 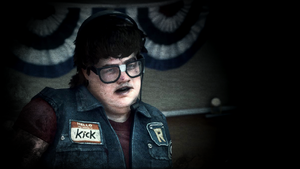 Kenny Dermot as the Envious Psychopath.