Be a Famous Rapper
Raise his Daughter Properly

Music Thief
Kenny West is a fictionalized parody of real-life singer/songwriter/record producer Kanye West. He is portrayed as a major recurring antagonist in the FOX Animated sitcom The Cleveland Show. Kenny West is a lying friend of Cleveland Brown's, who joins him in partnership, when writing hit songs, and then takes all the credit for it. Cleveland, being the idiot he is, continues to trust Kenny and unsurprisingly keeps getting betrayed.

He is the leader of the Hip Hop Illuminati, working alongside other famous rappers, who manipulate society into getting into trends, that get them to enjoy their music, promoting them to fame and wealth.

He was voiced by his real-life counterpart Kanye West.

In "Brotherly Love", Junior hit on a girl named Chanel Williams. Although she seemed to really like him, she'd soon turn out to already be in a relationship with Kenny West. Kenny would insult Junior for hanging out with his girlfriend. Rallo then came up to him and complimented him on his work, but Kenny unjustly insulted him too, publicy humiliating both of them in the mall. He then took off with with girlfriend, telling Chanel not to hang out with Junior anymore. Later on, at Federline's birthday party, Kenny was hired to perform as entertainment. Junior was invited, but Kenny still publicly berated Junior again for showing his face there. Kenny challenged Junior to a rap battle, which Junior won. Kenny stopped hating on Junior after being fairly defeated and they became friends. It also came to light that Chanel was his baby mama, and they parented a daughter named Candice West.

In "Harder, Better, Faster, Browner", Kenny sent Candice to Harper Elementary School, trying to get her a good education in the six-month absence of her now abandoning mother. Cleveland met him there, while dropping Rallo off and offered to babysit Candice, while he went to work. Cleveland returned Candice to Kenny and found out he worked, a substandard job, as a waitor at Fudruck the Police, a cheap fast-food restaurant. Seeing how poor Kenny really was, Cleveland wanted to help Kenny become rich, by writing him the hit rap song, "Be-Cleve in Yourself". Cleveland and Kenny co-prformed the song together, which helped them rise to fame. After Kenny' song made it to the top of the charts, he fired Cleveland and took all the glory and riches for himself.

In "Menace II: Secret Society", Kenny, now living in an illustrious mansion, turned out to be taken full credit for writing and producing Be-Cleve in Yourself. Cleveland rightfully damned him for theft, but Kenny pretended to not know who he was and kicked him out of his house. Cleveland later snuck in, and it turned out, he was a member of the Hip Hop Illuminati, a parody on the Illuminati, run by himself and four other rappers, these being Nicki Manaj, Questlove, Bruno Mars, and Will.i.am. Cleveland broke into their secret meeting, dressed as an ostrich, and learned the true power of the Hip Hop Illuminati, where it turned out they controlled society, by making up trends, that helped promote their own music. Cleveland was simply asked to leave and forget what he saw by Kenny, with the threat that he'd "disappear like Kevin Costner" if he told anyone. Shortly after returning home, the other four members of The Hip Hop Illuminati, told him that they hated working for Kenny West and planned mutiny on him, and asked for the help of Cleveland. Since Cleveland was his music writer, and Kenny consistently took full credit for it, they convinced him to trick him into taking credit for a career-ruining bad song. Cleveland got the idea to send Kenny West a Polka song. Junior and his friends Gary, a German girl, and a kid in a wheelchair had formed a Polka band, which he convinced Kenny to associate himself with. He successfully convinced Kenny to go up on stage and sing "Ta-ra-ra Boom-de-ay!". However, instead of failing like expected, Kenny ended up making the song sound awesome and only boosting his fame even more. Kenny West once again took the credit for the song, not even allowing Junior and his band in on any of his earnings, and The Hip Hop Illuminati disbanded, making Cleveland's attempt at heroism a complete failure.

Kenny West is an egotistical rapper who is obsessed with his own so-called glory. He uses the help of others to help him become famous, but betrays them when he becomes successful enough to not need them anymore and adds insult to injury, by taking credit for everything they helped him with. Under all of that cruelty, he is actually a kind and loving father, who only wants the best for his daughter. The same cannot be said about him being a husband, as he disrespects and bosses around his wife, to the point where she left him. Kenny didn't seem to show any remorse for this, as he was already taking part in boob-washing parties, in his appearance, after her leaving. It should also be noted that his daughter didn't appear in said episode, which could mean that he got rid of her, but isn't something that can be said for sure. It is possible that she simply just wasn't in that episode. 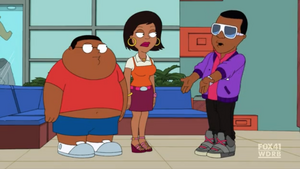 Kenny threatens Junior, to back away from his ex-girl. 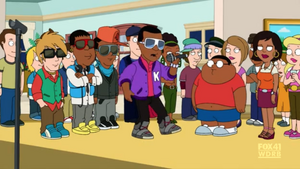 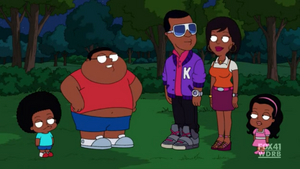 Kenny turns out to be a father. 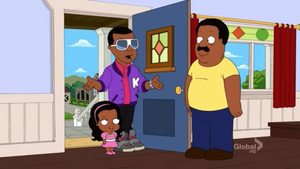 Kenny, now and only father, asks Cleveland to babysit Candice. 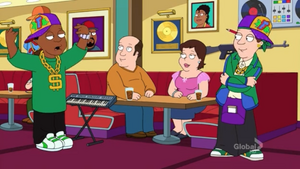 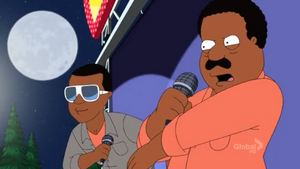 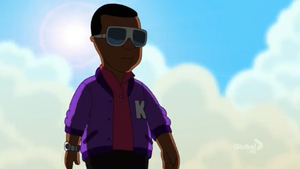 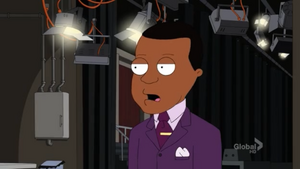 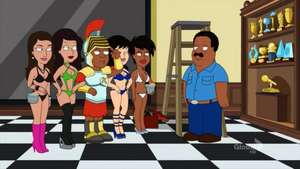 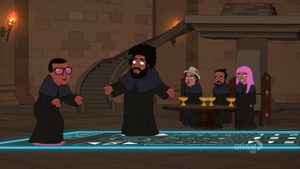 Kenny and the Hip Hop Illuminati. 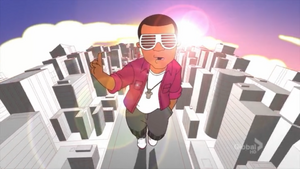 Kenny proves his political power in the song, "Illuminati Stuff". 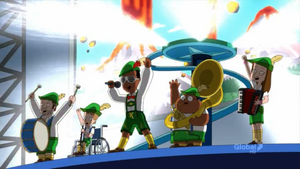