Kent C. Koopa is a big Koopa Troopa that first appeared as an optional boss fought in Paper Mario.

Kent has 70 HP, 10 Attack, and 6 Defense, making him a very powerful opponent. His strongest attack is a Ground Pound, in which he can deal up to 10 units of damage on Mario. He can also spin in his shell to squish Mario and his partner causing both of them to take 3 damage and inflict the injured status on the partner. It is highly recommended to use Watt as a partner to fight Kent, as her Electro Dash attack ignores Kent's high defense.

To defeat Kent, Mario must jump on his head twice to flip him over, exposing his tail as his weak spot. Unlike other Koopas, Kent will immediately get back up at the end of the turn. However, his biggest weakness aside from attacking his tail is the sleep status, as Kent has an 80% chance of falling asleep to an attack or badge that inflicts the sleep status. If asleep, he will remain on the ground if knocked over until he wakes up. If asleep, Mario and his partners have the advantage to attack his tail unprovoked.

Once he is finally defeated, Kent complements Mario's strength and runs off, never to be seen again.

Kent C. Koopa is a greedy Koopa Troopa who blocks a public path to make an earning by making people pay to cross. Although a powerful foe, he has a sense of affability as he never demands rudely, and recommends Mario to not fight him given his size advantage. 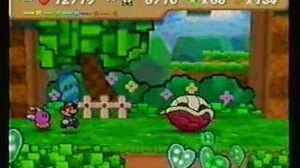